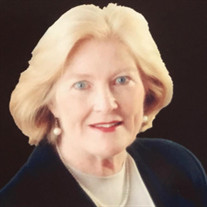 Adrienne O’Brien, age 86, peacefully passed away on November 14, 2021 at Cabrini of Westchester in Dobbs Ferry, New York after a courageous battle with anaplastic thyroid cancer, cared for by her sister, Madeleine O’Brien Guarnieri and her brother-in-law, Bruno Guarnieri. Adrienne was born November 19, 1935, grew up in Manhattan, the daughter of the late John Robert O’Brien, Sr. and Regina Crescentia Murphy. She was predeceased by her brothers, John Robert O’Brien, Jr. and Reginald Paul O’Brien. Adrienne attended Mother Cabrini Elementary School and as a scholarship student at Mother Cabrini High School. She studied at Hunter College of the City of New York, graduating with a major in History and as Student Body President in 1957. The following fifteen years, as a Missionary Sister of the Sacred Heart, Adrienne taught at Cabrini High Schools in New York and New Orleans and Cabrini University in Radnor, PA. Following Papal guidelines, she continued her work in research, university teaching, publication and administration. Adrienne completed two Master of Arts, one in Political Science and the second in Educational Administration at Villanova University. Dr. O’Brien received a NDEA award while pursuing doctoral work at the University of Southern California and completed her PhD at Syracuse University. Adrienne retired after thirty-seven years at New York Institute of Technology as a Professor of Communication Arts and served as the First Dean of NYIT’s School of Media and Arts for more than a decade. She was recognized twice as a Long Island top 50 woman by the Long Island Business News in 2002 and 2009. For two decades Dr. O’Brien shared the companionship and love of her late husband, Dr. David Salten, expert on Desegregation issues, who passed away in 2006 at 96 years of age. Adrienne’s retirement in 2011 brought her upstate to the Finger Lakes and support of the Finger Lakes Community College where she friended Donald Barton, who passed away at the age of 100, on October 7, 2021. They enjoyed thirteen wonderful years traveling the world together. Condolence contributions may be made to Finger Lakes Community College, 3325 Marvin Sands Dr., Canandaigua, NY 14424 or Cabrini High School, 1400 Moss St., New Orleans, LA 70119. A Memorial Mass will be planned for a later date in Canandaigua, NY.

The family of Adrienne O’Brien created this Life Tributes page to make it easy to share your memories.

Send flowers to the O’Brien family.