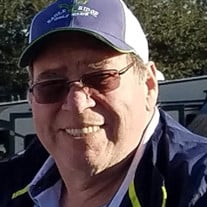 Alan Richard Altieri passed away peacefully on Friday, May 8th, 2020, in Summerfield, Florida. He was born on July 31, 1947, to James and Mary (Grande) Altieri at Dobbs Ferry Hospital. Alan attended Dobbs Ferry schools and graduated from Dobbs Ferry High School in 1965. After high school, Alan worked at the Sherriff's Department in Rockland County. He then moved to College Station, Texas, where he was in the restaurant business followed by working in the oil fields. Upon his return to Dobbs Ferry, Alan worked for Frito Lay for 18 years until he retired in 2004. Aside from his love of the Yankees, Alan enjoyed watching Redskins and Aggie football. He was an avid reader and was very knowledgeable of history, particularly the Civil War. He also had a love for music, especially Opera. Alan and his wife, Patricia (Patty) moved to Summerfield, Florida in 2010. They enjoyed all of the benefits of the warm weather and many activities they had in their community. They loved traveling on cruises with their many friends. Alan will be forever remembered for his smile, laugh, and sense of humor. Alan is survived by his wife, Patty (Breckels) Altieri; daughter, Christine (Jeffrey) Altieri O'Sullivan; son, James Thomas (Nici) Altieri; grandchildren, Jaxson and Madison Altieri; brother, James (Joyce) Altieri; sister, Donna Altieri; sister-in-law, Eleanor (Bachant) Anniccharico; brother-in-law and good friend, John (Louise) Breckels; nieces, Julianne (Paolo) Curiel and Erica Lee (Griffin) Breckels Post; nephews, Gary (Dawn) Anniccharico and John (Kortnie Emmons) Breckels, and many loving friends. He is preceded in death by his father, James Altieri and mother Mary (Grande) Altieri. Due to current state guidelines, there will be no funeral at this time. In lieu of flowers, donations may be made to The Brandley House: Hospice of Marion, Brandley House 17395 SE 109th Terrace Rd Summerfield, FL 34491

Alan Richard Altieri passed away peacefully on Friday, May 8th, 2020, in Summerfield, Florida. He was born on July 31, 1947, to James and Mary (Grande) Altieri at Dobbs Ferry Hospital. Alan attended Dobbs Ferry schools and graduated from... View Obituary & Service Information

The family of Alan Richard Altieri created this Life Tributes page to make it easy to share your memories.

Alan Richard Altieri passed away peacefully on Friday, May 8th,...