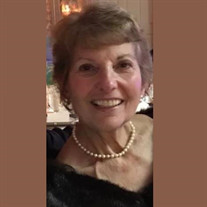 Angela Van Dekker of Hastings-on-Hudson, NY died peacefully on May 23, 2019 surrounded by her family at the age of 76 after a valiant battle with pancreatic cancer. Angela was born on September 23, 1942 to John and Rose DeVivo who predeceased her. She graduated Saint Agnes Seminary High School and Fordham University undergraduate in 1963, obtained a Masters in Education from Fordham in 1964. She received her MBA from Fordham in 2001 with induction into Beta Gamma Sigma, the business school honor society (receiving the Zeta Chapter Medallion award), and Alpha Mu Alpha, the national marketing honor society. She also has a Masters degree from the School of Education where she served as a Graduate Assistant. Angela married Benjamin Van Dekker on June 29, 1973. Angela was the co-founder of the “Committee for Youth, Inc.” a not-for-profit corporation that provided services and activities for the youth of Hastings-on-Hudson. She co-wrote the grant for the Youth Advocates of Hastings that became a model for Westchester County Youth Services. She was the Director for the Continuing Education Program for Hastings, Dobbs Ferry and Irvington. She was trainer for the Junior League of Westchester and provided seminars for the Westchester County Office of Women on “Women in Power”. Angela started her employment at Fordham University as the Student Employment Coordinator June 1st 1983. In her tenure there, she has worked in education, as a teacher, a trainer, director of Continuing Education Programs, and of Student Employment culminating in Assistant Vice President of Student Financial Services responsible for financial aid, student employment and student accounts. Angela was appointed to Congressman Gillmans’ education advisory board for many years. She was nominated by Governor George Pataki and approved by the state senate and served for 12 years HESC Board of Trustees, the last two spent as vice-chair and then chair. She was active in the New York State Financial Aid Administrators Association (NYSFAAA) at the state level previously as Vice President of the association, conference program committee chair, as well as serving on several statewide committees, and in the NYC region as secretary, then chairperson and was the greater New York metropolitan area representative to the NYSFAAA Executive Council. She was a trainer and presenter for the Junior League of Westchester, the College board, the national association (NASFAA), the eastern regional association (EASFAA), NYSFAAA, CUNY the Higher Education Services Corporation (HESC) and annually for the National College Fair in NYC, as well as local high schools and other projects. She served on the advisory boards of ELM (Electronic Loan Management) Resources; two software companies APPWORKS and Overture and several lenders Citibank, AFC (Academic Finance Corporation) and Education Finance Partners (formerly served on Chase, Fleet and Key Education Resources boards). She served on the 22nd Congressional Education Advisory Committee from 1989- 2002 when the congressman retired. She was awarded Alpha sigma nu - Jesuit honor society Fordham’s Sursum Corda Award March 2016, CBA Leadership award Multiple Certificates of Appreciation from NYSFAAA professional association. Angela lived a full and rewarding life retiring as Associate Vice President of Student Financial Services of Fordham University after 36 years. She is survived by her devoted husband Benjamin Van Dekker, loving children Angela (Robert) Outhouse, John (Jessica) Van Dekker and Carl Van Dekker. She was adored by her grandchildren Melissa (Ron) Dinsmore, Danielle & Michael Moray; Jackson, Violet & Elyse Van Dekker; great grandchildren Charlotte and Grayson, many cousins, coworkers and friends. Her family was her life. Visitation is Tuesday May 28th, 2019, 4-9 pm at Edwards-Dowdle Funeral Home, 64 Ashford Avenue, Dobbs Ferry, NY. Mass of Christian Burial at Fordham University Church, Wednesday, May 29, 2019, 10:00 a.m. In lieu of flowers, donations may be made to the Angela Van Dekker Endowed Financial Aid Fund Scholarship which Fordham University graciously honored her with upon her retirement.

Angela Van Dekker of Hastings-on-Hudson, NY died peacefully on May 23, 2019 surrounded by her family at the age of 76 after a valiant battle with pancreatic cancer. Angela was born on September 23, 1942 to John and Rose DeVivo who predeceased... View Obituary & Service Information

The family of Mrs. Angela M. Van Dekker created this Life Tributes page to make it easy to share your memories.