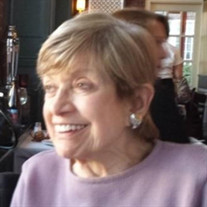 Ann E. McMahon Bogart, Ph.D., a highly successful clinical psychologist with a 40-year private practice in Manhattan, died in her home on Thursday, December 10, 2020. The cause of death was illness related to dementia. She was 83 and had lived with her husband Jeffrey D. Bogart, for 36 years in Hastings-on-Hudson, NY, before moving with him early this year to Hartsdale, NY. Dr. McMahon (her professional name) received her PhD in Clinical Psychology from Adelphi University in 1976 and a postdoctoral certificate from that school in Psychotherapy and Psychoanalysis in 1980. She received a BA degree from the College of New Rochelle in 1958, an MS degree in School Psychology from City University in 1971, and an MA degree in Clinical Psychology from Adelphi University in 1974. Before opening her private practice in 1976, she worked as a public school teacher from 1968 to 70 and as a co-therapist with Ian Alger, M.D., in New York City from 1966 to 1974. She was at the Bronx V.A. Hospital as a psychology trainee from 1974 to 1976. She also worked as a staff psychotherapist at Baldwin Community House in Baldwin, NY, from 1976 to 1978. In addition, she served as an assistant director of Adelphi University's Postdoctoral Psychotherapy Center. While she was certified by the American Psychological Association as proficient in the treatment of alcohol and substance disorders, she maintained a general practice throughout her career. Over the last six years, Dr. McMahon suffered a series of illnesses, eventually leading to her early retirement towards the end of 2016. Dr. McMahon married Mr. Bogart, a New York investor and public relations consultant, in 1986. Her first marriage to the late James M. McMahon PhD ended in divorce. She is survived by, besides her husband of 34 years, four children by her first marriage--Catherine M. Gonchar of Issaquah, WA; Deirdre A. Savino of East Norwich, NY; James M. McMahon of Simpsonville, S.C.; and Jean H. McMahon, New York , NY. She is also the beloved grandmother of seven grandchildren--Jessica, Rachel, Gabriella, Anna, Harrison, Charles and Conor—and the beloved sister-in-law of Ronnie and Judith Bogart. Dr. McMahon was a former member of the American Psychological Association, of the New York State Psychological Association and of the Adelphi Society for Psychotherapy and Psychoanalysis of which she was treasurer from 1977 to 1978. She enjoyed skiing and tennis and was an avid reader of spy novels, thrillers and historical romances. She was a former member of the Hudson River Tennis Club (now the Tennis Club of Hastings), the Riverview Manor Tennis Club in Hastings, and the former Hastings non-profit Citizens for the Burke Estate, Inc. Those who knew her enjoyed her sharp wit, thoughtfulness and generosity. She will be dearly missed by all. Funeral arrangements include a visitation and eulogies at the Edwards-Dowdle Funeral Home, Dobbs Ferry, NY on Fri., Jan. 8, at 11 a.m., followed by burial in The Kensico Cemetery, Valhalla, NY. The family requests that in lieu of flowers, donations be made to the Alzheimers Association

Ann E. McMahon Bogart, Ph.D., a highly successful clinical psychologist with a 40-year private practice in Manhattan, died in her home on Thursday, December 10, 2020. The cause of death was illness related to dementia. She was 83 and had lived... View Obituary & Service Information

The family of Ann E. McMahon Bogart, Ph.D. created this Life Tributes page to make it easy to share your memories.