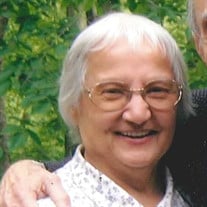 Anna “Louise” Giusti of Ardsley, NY, died early Wednesday, January 27th, at White Plains Hospital from complications of Covid-19. She was 94 and was born in Brooklyn, NY, to Olga Miskovich and Maximo Manzon on August 4th, 1926. While she died in hospital isolation, Louise was virtually surrounded by family members and clergy through video communication. Louise valued friendship and family and had a special ability to build and sustain community wherever she lived, studied, worked and traveled. She had a keen sense of humor and believed laughing at oneself was an essential life skill. Louise did not have a “bucket list” because she believed there was no point in putting off until later, what one could experience in the present! She found joy in life and in each day. Louise’s favorite places were Manhattan, Florence, Italy, Edinburgh, Scotland and Down East, Maine. When she wasn’t traveling, her favorite pastimes were completing the NY Times Sunday crossword, knitting, jigsaw puzzles, Turner network movies, caring for her beloved felines Callie and Gray, and manning the corner table at every St. Barnabas tag sale. Louise was raised on the Lower East Side and far upper West Side of Manhattan. She proudly tested into/attended Hunter High School, earned a B.S. in Nursing from Hunter College, attended Westchester/Grasslands School of Nursing where she trained and earned her Registered Nurse (RN) license, and was enrolled at Teachers’ College (Columbia), where she was close to completing a Masters degree in Nursing Education. Louise’s nursing career spanned more than 50 years, covering a wide variety of positions ranging from the Bellevue Hospital Chest Service and Methadone Maintenance Clinic, to 30 +/- years of school nursing at The Chapin School, performing insurance physicals for Equifax/Porta-medic, and per diem nursing at Sing Sing prison in Ossining, NY. Louise’s summers of 25 +/- years were spent as a nurse at Camp Berwick on Dyer Island, Milbridge, Maine, run by the Berwick Boys Foundation in West Bridgewater, MA. In addition, during World War II, Louise served as a member of the United States Cadet Nurse Corps, and was based in Manhattan. Louise is survived by daughters Marina Veatch (Jeffrey) and Gina Wolfman (Scott), grandchildren Elena, Emma and Sophie. She also leaves behind her beloved cats Callie and Gray. She was predeceased in 2007 by her husband and Pearl Harbor survivor (Augie) and in 2008 by her grandson (Justin). In lieu of flowers, donations may be made to The Justin Veatch Fund (www.thejustinveatchfund.org) or Berwick Boys Foundation (www.berwick.org).

Anna &#8220;Louise&#8221; Giusti of Ardsley, NY, died early Wednesday, January 27th, at White Plains Hospital from complications of Covid-19. She was 94 and was born in Brooklyn, NY, to Olga Miskovich and Maximo Manzon on August 4th, 1926. While... View Obituary & Service Information

The family of Anna Louise Giusti created this Life Tributes page to make it easy to share your memories.

Send flowers to the Giusti family.