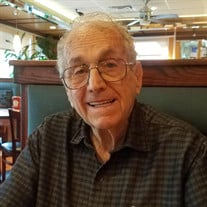 Anthony Joseph (“Tony”) Vaccaro, 92, recently of Tarrytown and formerly of Pound Ridge and Hartsdale, passed away on July 25, 2021. Born in Brooklyn, New York, he was the son of the late Giulio and Beatrice Verrastro Vaccaro. He had two sisters, Julia (deceased) and Margaret. Tony graduated from the High School of Industrial Arts and began his career as a sign painter. With some luck and help from a friend he was able to join the printers’ union and made his career in the newspaper industry as a linotype machine operator. Tony was drafted into the Army and served in the Korean War. It was his first time traveling abroad and he often talked about his experiences in the Army and about the other soldiers he met. He was fortunate to be spared combat during his time served. In the spring of 1959 Tony met Alfia Frieda Pavone at a Catholic Charities dance in Astoria. It was love at first sight and they had a Christmas wedding on December 26, 1959. Tony and Frieda settled in Hartsdale, NY and raised their family. They lived in Hartsdale for 30 years. Tony was a devoted husband and father. He had many cousins, nieces and nephews and spent a great deal of time with family and friends. He often said that the most important thing in life was to love one another and to laugh. Tony would be the first to tell you that he started life as an introvert, his wife helped pull him out of his shell, and in later years he became a true extrovert. He always liked to strike up conversations and was genuinely interested in learning about other people. He made many friends over the years. He loved to tell jokes, even when they were the same jokes rekindled many times. Tony truly enjoyed music, and played accordion and harmonica. He was a trained calligrapher and was able to write beautifully, with exacting precision and flourish. Tony was also a poet and often wrote poems to mark important milestones in the lives of his family and friends. Tony had a passion for landscaping and will be remembered by his Hartsdale neighbors for having a well-manicured lawn. Tony devoted his retirement years to playing poker at the Connecticut casinos right up until the pandemic closed them down. His favorite game was Texas Hold’em. He was fascinated with the game’s strategy and spent his downtime studying the odds and striving to improve his game. Tony made many friends during his casino years – too many to mention by name – including bus drivers, fellow players, dealers, waiters, waitresses and other casino employees. The family appreciates everyone who looked out for him so that we could sleep at night. Tony is survived by his daughter Beatrice Vaccaro, son Anthony (wife Alicia) Vaccaro, and five grandchildren: Camille and Caleb Curry; and Cara, Anthony and Emma Vaccaro. In addition to his sister Margaret Sheehan, Tony is survived by many cousins, nieces and nephews as well as dear friends Frank and Maryann Maugeri. Tony was predeceased by his wife Alfia Vaccaro who passed away on July 6, 2015. Tony will be sorely missed and greatly remembered. For anyone interested in making a donation in lieu of flowers, the family suggests the Memorial Sloan Kettering Cancer Center at giving. https://www.mskcc.org/

Anthony Joseph (&#8220;Tony&#8221;) Vaccaro, 92, recently of Tarrytown and formerly of Pound Ridge and Hartsdale, passed away on July 25, 2021. Born in Brooklyn, New York, he was the son of the late Giulio and Beatrice Verrastro Vaccaro. He... View Obituary & Service Information

The family of Anthony Joseph (“Tony”) Vaccaro created this Life Tributes page to make it easy to share your memories.

Send flowers to the Vaccaro family.