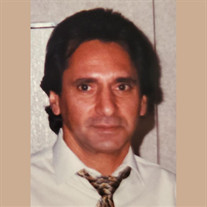 On Sunday May 3rd, 2020, Anthony “Nino” Torre, loving husband and father of six children, passed away at the age of 76. Nino was born to Salvatore and Filippa Torre in Castiglione di Sicilia Catania, Italy on September 19th, 1943, and immigrated to the United States in 1958, at just 14 years old. Nino found a passion for cooking at a young age and used this talent to build his career as a chef. He was best known and loved in his community for his skills as a chef at the popular Brick Oven Pizzeria in Dobbs Ferry, where he proudly worked among family, and friends who became family, for many years. Along with cooking, he had a love for playing pool and following baseball, and like a true New Yorker, he was a dedicated Yankees fan. Nino was known by everyone for his kindness and his unexpected sense of humor, and he loved to make his family laugh. He was a big-hearted man who had a soft spot for all the animals his children adopted throughout the years, though he would rarely admit it, and welcomed them into his home. Nino was a devoted husband to his wife Clara, and loving father to his children, and always lived by the rule that nothing comes before family. Nino was preceded in death by his brothers Paul and Tindaro Torre and survived by the rest of his four siblings, Vinny, Joseph, Barbara, and Gaitana Torre. He is also survived by his wife Clara, his six children Annette, Marianne, Donna, Joe, Salvatore and Marisa Torre, along with 10 grandchildren and 6 great grandchildren.

On Sunday May 3rd, 2020, Anthony &#8220;Nino&#8221; Torre, loving husband and father of six children, passed away at the age of 76. Nino was born to Salvatore and Filippa Torre in Castiglione di Sicilia Catania, Italy on September 19th, 1943,... View Obituary & Service Information

The family of Anthony “Nino” Torre created this Life Tributes page to make it easy to share your memories.

Send flowers to the Torre family.