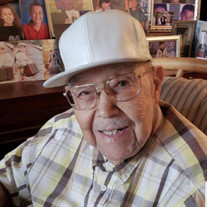 In Memoriam, Armando H. Pretto (December 3, 1919 - September 19, 2021). Armando was born on December 3, 1919, in Colon, Panama. As a young man growing up in Panama, he hustled, working several different jobs to raise money to have a better life. He always envisioned leaving Panama and going to the United States to become successful entrepreneur. In the 1940s, Armando was the first in our family from Panama to migrate to the United States, where he attended the New York Institute of Photography. He photographed every imaginable special occasion from Baptisms to Bar (Bat) Mitzvahs, and family portraits. He met and married Carmen Gloria in New York. They were married for over 70 years. He entered business on his own, becoming a successful small business owner until he retired in 1982. They lived the American dream. Both of them together made it possible for his four brothers, two sisters, their children along with his mother to come to the United States to live their own American dream. With each new arrival, they opened their humble home until each found a job and their own place to live. But Armando and Gloria’s kindness did not stop there. Armando became a father figure to his brothers, sisters and their children. Eventually, Armando and Gloria began their own family having four children of their own children. He was always dispensing advice to all who came by their home, whether they requested it or not. Armando stressed the importance of education and ensured that all of his children became successful in their own right. All who have met Armando were fortunate to have experienced his great humor, wise counsel and generosity, which came from deep within his heart. His grand presence will sorely be missed. Armando is survived by his wife Gloria and his four children: Ada, Armando, Felix and Cynthia. As well as his grandchildren: Alyssa, Joshua, Corina, Joey, Nicholas, Vinny, Aidan and Riley and great grandchildren : Joshua, Joziah and Jovanni. In lieu of flowers please make donations to: www.donorschoose.org

In Memoriam, Armando H. Pretto (December 3, 1919 - September 19, 2021). Armando was born on December 3, 1919, in Colon, Panama. As a young man growing up in Panama, he hustled, working several different jobs to raise money to have a better... View Obituary & Service Information

The family of Armando H. Pretto created this Life Tributes page to make it easy to share your memories.

Send flowers to the Pretto family.