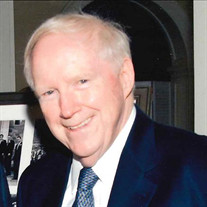 Arthur James Beckett August 5, 1928 – February 20, 2022 Arthur James Beckett, age 93, a long-time resident of Ardsley, New York, passed away peacefully at his home on Sunday, February 20, 2022 with his loving family by his side. He was the beloved husband of Antoinette M. (Fuchs) Beckett for nearly 65 years. Born in Hoboken, New Jersey, he was a son of the late Timothy and Catherine (Madden) Beckett. Arthur (Art) graduated from Fordham College of Business Administration in June 1950. In December of that year he was drafted into the U.S. Army during the Korean War. After attending the Army’s Officer Candidate School, Art served his country honorably as a First Lieutenant in the Army Corps of Engineers. While in Korea he became friends with Ted Williams, with whom he shared many fond memories. After the war, Art started his career on Wall Street as an institutional bond salesman. In 1956, he was awarded a Master of Business Administration degree from New York University. Art worked at Dean Witter & Co. for most of his 25 years as a bond salesman. In 1981 he joined Kidder Peabody as a Financial Advisor in their White Plains, New York office, which eventually became A. G. Edwards & Sons and then Wells Fargo Advisors, from where he retired in 2009. Marrying in 1957, Art and Annette raised their family of three children in Ardsley. Here, Art enjoyed spending time with his adored children and grandchildren, each of whom he was extremely proud. Following his retirement, Art was able to fully indulge his love of music, listening to his vast collection of Frank Sinatra (another Hoboken-ite) and big band era albums, as well as studying his mathematics and philosophy books and, of course, freely quoting from the “Great Books of the Western World”. Travel played a large part during these years with memorable European trips accompanied by friends as well as trips to visit his family. However, Art was happiest at his home in Ardsley, seated in his cadet blue rocker, reading from one of his many volumes while listening to “Frankie”. It was here, in the sun- drenched corner of his home, that Art lived his final days surrounded by love and care. As the Irish would say “It was grand”! In addition to his wife, Annette, Art is survived by his three children, William J. Beckett (wife, Stacy), Dr. Thomas A. Beckett, Laurie Beckett Slaughter (husband, Hoke); seven grandchildren, Alex Beckett, Catherine Beckett, Will Beckett (wife, Anna), Jack Beckett, Brooke Beckett, Lilly Slaughter, and Gwen Slaughter; and many nieces and nephews. Arthur, the youngest of nine, is predeceased by his eight siblings, Mary Pereira, Eugene Beckett, Timothy Beckett, Ann Dee, Joseph Beckett, Harold Beckett, Eileen Beckett, and John Beckett. Family and friends will honor and remember Art’s life by gathering at the Edwards-Dowdle Funeral Home in Dobbs Ferry, New York on Friday, February 25th from 4 to 6pm. A Mass of Christian Burial will be celebrated at Our Lady of Perpetual Help Church in Ardsley, New York on Saturday, February 26th at 11am. Military funeral honors will be rendered. In lieu of flowers, memorial contributions in Art’s name can be made to Hospice of Westchester, Tunnel to Towers Foundation or Wounded Warrior Project.

The family of Arthur J. Beckett created this Life Tributes page to make it easy to share your memories.