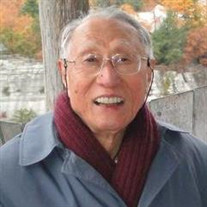 Dr. Asao Hirano died peacefully on July 25, 2019 at the age of 92. He was the beloved husband of Keiko, devoted father to Michio, Ikuo, Yoko, and Shigeo, and adored grandfather of Kyle, Camilla, Olivia, James, Serena, Sydney, and Leo. Dr. Hirano was born in Tomioka, Japan and educated in Niigata and Kyoto, where he graduated from the Faculty of Medicine at Kyoto University in 1952. After a one-year rotating internship at the US Army Hospital in Osaka, he traveled to the US on a Japanese cargo ship with a one-way ticket and $30 cash (the maximum limit for Japanese traveling abroad). Dr. Hirano continued his training in medicine and neurology at Harlem, Bellevue, and Montefiore Hospitals in New York. Inspired by Dr. Harry M. Zimmerman, he trained in neuropathology, his lifelong academic passion. In 1958, he met his future wife, Keiko, at a picnic for Japanese expatriates hosted by Mrs. Eleanor Roosevelt and they married the following year. As newlyweds, Dr. and Mrs. Hirano spent a year as “honeymooners” in Guam, where his investigations of the ALS and Parkinsonism-dementia complex revealed abnormal neuronal inclusions now known as Hirano bodies. Dr. Hirano returned to Montefiore Medical Center, where he studied amyotrophic lateral sclerosis (ALS) and other neurological disorders for over six decades and was the Harry M. Zimmerman Professor of Neuropathology. He authored 800 articles in medical journals and dozens of textbooks that were translated into several languages. Moreover, Dr. Hirano trained scores of physicians who became academic and clinical leaders internationally. His accomplishments were recognized by a commendation from the U.S. House of Representatives for distinguished services on behalf of medicine and humanity in 1992 and by the Japanese government with the Order of the Rising Sun award in 2001. Dr. Hirano’s favorite pastimes included playing the harmonica, Sumi-e brush painting, photography, growing tomatoes, walks in the park with Keiko, and making his grandchildren smile. Visiting hours will be Friday, August 2, 5-8 pm at Edwards-Dowdle Funeral Home, 64 Ashford Avenue, Dobbs Ferry, NY. In lieu of flowers, donations may be sent to the American Association of Neuropathologists (https://www.neuropath.org/donate).

Dr. Asao Hirano died peacefully on July 25, 2019 at the age of 92. He was the beloved husband of Keiko, devoted father to Michio, Ikuo, Yoko, and Shigeo, and adored grandfather of Kyle, Camilla, Olivia, James, Serena, Sydney, and Leo. Dr.... View Obituary & Service Information

The family of Asao Hirano M.D. created this Life Tributes page to make it easy to share your memories.

Send flowers to the Hirano family.