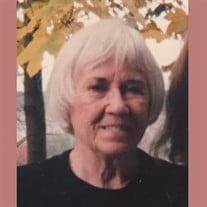 Barbara Henshaw, 94, passed away on Wednesday, December 15, 2021, at Cabrini of Westchester, Dobbs Ferry, New York from complications due to Dementia and Parkinson’s Disease. Barbara, born in Columbus, Ohio on October 8, 1927, was the daughter of Clover and Robert Evans. She attended Columbus public schools graduating in 1946 from West High School at which time Barbara came east to visit relatives in Westchester, New York. It was during her stay that she met her future husband, John Henshaw of Dobbs Ferry, at the Playland pool in Rye, New York. They married on January 26, 1947 at Sacred Heart Church, Dobbs Ferry, New York. Initially, Barbara worked as a server at the Mayflower Diner, which was owned by her in-laws. After several years at home to raise her children, she went to work in the Dobbs Ferry High School Cafeteria where she eventually became the supervisor until her retirement. In her spare time, Barbara enjoyed reading, sewing, knitting, embroidering, refinishing furniture and going to tag sales looking for yet another basket or blue plate. She was always ready for a good game of Scrabble or Canasta, trips to Jones Beach on the weekend, outings to New York City with friends, and attending DF Eagles sporting events to watch her children participate. Most of all she loved spending time with her grandchildren, often traveling to Syracuse, New York to see her granddaughter. Barbara is survived by her daughter, Sheryl (Thomas) Welch, sons John and Mark; granddaughter, Leslie (Dan) Welch-Strumlok, and grandson, Jason Henshaw. She was predeceased by her husband of 71 years, John Henshaw, father, Robert Evans, mother and stepfather, Clover and Harry Winstaffer and sister, Betty McCoy. The family would like to extend their sincere thanks for the kind care given by her friend, Imogene Spencer, and from the staff, nurses and aides of 1 West, Cabrini of Westchester and the staff of Hospice of Westchester. A spring burial in Ferncliff Cemetery will be private. In Barbara’s memory, please consider a donation in her name to Cabrini of Westchester, 115 Broadway, Dobbs Ferry, NY 10522, to Dobbs Ferry Volunteer Ambulance, 81 Ashford Avenue, Dobbs Ferry, NY 10522 or to a charity of your choice.

Barbara Henshaw, 94, passed away on Wednesday, December 15, 2021, at Cabrini of Westchester, Dobbs Ferry, New York from complications due to Dementia and Parkinson&#8217;s Disease. Barbara, born in Columbus, Ohio on October 8, 1927, was the... View Obituary & Service Information

The family of Barbara Henshaw created this Life Tributes page to make it easy to share your memories.