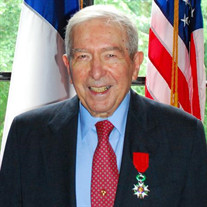 Bruno Viani was born on April 21, 1921 and grew up in Greenwich Village in New York City. Bruno was the youngest of the three sons of Antonio and Luisa Viani. After graduating from DeWitt Clinton High School, Bruno joined the New York State National Guard in 1940 as a private in the 27th Infantry Division, which marked the beginning of his distinguished military service during World War II. In November 1944, Bruno was a first lieutenant with the 100th Infantry Division and was leading his platoon of approximately forty infantrymen during the Vosges Mountains Campaign. During an advance upon the French village of St. Remy, First Lieutenant Viani sustained a bullet wound to his left shoulder. Following hospitalization and rehabilitation in both France and the United States, Bruno recovered from his wound and was discharged from the army in late 1945 with the rank of captain. Upon returning to civilian life, Bruno began a long and successful career in sales, first with the White Rock Beverage Company and then with Peerless Wine and Spirits Importers. More significantly, Bruno married his sweetheart, Evelyn Rosasco, at Our Lady of Pompeii Church in Greenwich Village in October 1950. Bruno and Evelyn’s children include Michael, Steven (spouse Maureen), and Lynn Sudak (spouse Stephen). Sadly, Steven's twin baby sister, Suzanne, survived for only a few days after her birth. In addition to family and career, Bruno found time to be active in the American Legion, the Children’s Aid Society, and the 100th Infantry Division Association. In early 2007, Bruno and Evelyn moved from Larchmont to the Atria in Ardsley. After almost sixty years of mutually devoted married life, Bruno lost his beloved Evelyn in November 2007. Throughout his life, Bruno was sustained by his deep and abiding Roman Catholic faith and prayer. In addition to his children, Bruno is survived by his four grandchildren Brian, Caitlin Sangiorgi (spouse Michael), Kevin, and Mark Sudak and two great-grandchildren Leo and Francesca Sangiorgi, along with nephews and nieces. Among the military awards that Bruno received are the Bronze Star, Purple Heart, Combat Infantryman Badge, and several campaign medals. In May 2010, Bruno received one final recognition for his military service. At a ceremony at the French Consulate in New York City, Bruno, along with ten of his brothers-in-arms and one sister-in-arms, received the highest award that France can bestow, the Legion of Honor. Having attained his 98th birthday on Easter Sunday, Bruno Viani passed away peacefully on June 6, 2019, the 75th anniversary of D-Day.

Bruno Viani was born on April 21, 1921 and grew up in Greenwich Village in New York City. Bruno was the youngest of the three sons of Antonio and Luisa Viani. After graduating from DeWitt Clinton High School, Bruno joined the New York State... View Obituary & Service Information

The family of Mr. Bruno R. Viani created this Life Tributes page to make it easy to share your memories.

Send flowers to the Viani family.