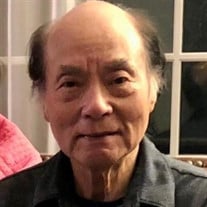 Mr. Bumnai Edward Hahm of Irvington, NY, passed away on June 25, 2020 at Phelps Hospital in Sleepy Hollow, NY at the age of 86. Edward was born in Wonsan, Korea on October 26, 1933 to Tae Young Ham and Dong Ryan Kim. He graduated from Yonsei University with a degree in Mathematics. It was Edward’s desire to advance his studies in the U.S., and on January 14, 1957, he arrived in Honolulu, HI on the first leg of his travels to Ohio. Edward, also known as Ed or Eddie, attended Miami University in Oxford, OH where he obtained his Master of Arts in Mathematics. Subsequently, Ed also obtained his MA in Computer Science from NYU. During his time at Miami U, Ed met his beloved wife, Younghee, while she was touring various universities with her singing group to meet other Korean students. Ed and Younghee married on April 8, 1961 in New York City at Riverside Chapel. Ed is father to his three children and grandfather to three boys. Ed was the second youngest child and brother to five sisters. Ed had an accomplished career, mostly in the wine and spirits industry. He had a successful 18 years at Joseph E. Seagram & Sons which included co-heading the Market Research team. Ed made his final career move to Adams Beverage Media where he spent seven years as the Corporate Research Director. He and his team were responsible for developing and publishing various publications including the Adams Liquor Handbook which is used industry wide. Ed was a member of the Irvington Presbyterian Church and he sang in the chancel choir for many years. Ed’s passions included photography, computers, trips to the casino with Younghee, religion, Asian astrology, maintaining the lawn & gardening, crossword puzzles, singing, learning music theory, and writing. Edward is survived by his children: Grace Hahm, Irene Hahm Cole with her husband Mark Cole, and James Hahm with Agnes Doran Hahm; his sisters: Mija Cole and Suncha Calderon; and his three grandsons: Nicholas Hahm, Michael Hahm, and Matthew Hahm Visitation will be held from 10:00am to 11:30am with Funeral Service beginning at 11:30am on Thursday, July 2 at Edwards-Dowdle Funeral Home, 64 Ashford Ave, Dobbs Ferry, NY 10522. Burial will follow at Ferncliff Cemetery, 280-284 Secor Road, Hartsdale, NY 10530 in the Hillcrest Garden section. In lieu of flowers, the family asks that gifts be directed to Phelps Hospital: Online giving: https://phelpsevents.org/give-now Under designation, click “Comfort Care Rooms” and you may indicate the gift is in memory Edward Hahm. By Check: send check payable to “Phelps Hospital” to: Development Office Attn: Jill Scibilia 1 Phelps Lane, Suite 106 Sleepy Hollow, NY 10591 Indicate “Comfort Care Rooms” in the memo field and with a note that the gift is in memory of Edward Hahm.

Mr. Bumnai Edward Hahm of Irvington, NY, passed away on June 25, 2020 at Phelps Hospital in Sleepy Hollow, NY at the age of 86. Edward was born in Wonsan, Korea on October 26, 1933 to Tae Young Ham and Dong Ryan Kim. He graduated from Yonsei... View Obituary & Service Information

The family of Bumnai Edward Hahm created this Life Tributes page to make it easy to share your memories.