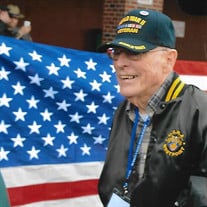 Cromwell George Smith, 92, husband of Joan B. Smith of Tarrytown, NY, passed away Sunday, May 12, 2019 at his longtime home on Embree Street in Tarrytown. Born November 12, 1926, in Yonkers, NY, he was the son of the late George Joseph and Margaret Smith (nee McMahon). Mr. Smith graduated from Irvington High School in 1944 where he was a proud member of Irvington’s first undefeated football team. He then served in the U.S. Navy during World War II, coming home from the war to attend Clarkson University where he graduated in 1950 with a degree in electrical engineering. He later worked for Anaconda in Hastings, NY and then worked at The United States Military Academy at West Point for 30 years as an electrical engineer. Smith also proudly served in the United States Army Reserve for over 30 years, retiring as a full colonel and serving active duty in Germany during the Korean War. He was a lifelong parishioner of Transfiguration Church in Tarrytown and an active member of the Knights of Columbus. He loved following his son’s and grandchildren’s athletic pursuits and was proud of his Irish and German heritage. Cromwell was a man of great integrity and kindness who had earned the respect and admiration of many. He is survived by son Brian Cromwell Smith, the mayor of Irvington NY, and his wife Keira of Irvington, NY and his foster son Brian Forter of Queens, NY; a granddaughter, Isabella and a grandson Ronan Brian, both of Irvington. He is also survived by his sister Mary Louise “Mickey” Coletta of Moss Point, MS and many nieces, nephews, grandnieces and grandnephews. Friends may call, Wednesday from 4:00 to 8:00 PM at Edwards Dowdle Funeral Home, 64 Ashford Avenue, Dobbs Ferry. A Mass of Christian Burial will be celebrated on Thursday at 11:00 AM at Immaculate Conception Church, 16 North Broadway, Irvington. Interment will follow in Sleepy Hollow Cemetery, 540 North Broadway, Sleepy Hollow, NY. In lieu of flowers, donations can be made to the charity of the donor’s choice, with a recommendation for charities that support the United States military or Alzheimer’s research.

Cromwell George Smith, 92, husband of Joan B. Smith of Tarrytown, NY, passed away Sunday, May 12, 2019 at his longtime home on Embree Street in Tarrytown. Born November 12, 1926, in Yonkers, NY, he was the son of the late George Joseph and Margaret... View Obituary & Service Information

The family of Cromwell George Smith created this Life Tributes page to make it easy to share your memories.

Cromwell George Smith, 92, husband of Joan B. Smith of Tarrytown,...

Send flowers to the Smith family.