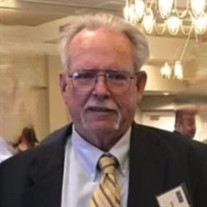 Daniel J. Mulholland, Jr., Coach “Mully” passed away January 15, 2022 surrounded by his loving family. Mully is survived by his wife, Laney; his children, Kelly, Sean, Megan, Shannon, and Brigitte; his sons in law, Anthony Rivera, Zach Gray, and Dennis Ashford; his loving sister, Joan Scott; his grandchildren, Allison, Charlie, Cameron, Kayla, Liliana, Daniela, Sophia, and Olivia; along with nephews and a niece; and his seven furry family members. Dan is predeceased by his father, Daniel Sr. and his mother, Alice, sister, Lois Meck, brother, Tyler Mulholland, and nephew, Daniel Scott. In his early years, Mully loved archery and traveling with his father to tournaments. His summers were spent with his grandfather in Dolgeville, N.Y. He was a graduate of Ardsley High School and Brockport University. Mully spent his life loving being a part of the education system and the sports world. His teaching started in Elmsford, Yorktown, Peekskill, and continued at Ardsley High School where he taught History, Economics, Business Law, and Criminal Justice for almost 40 years. His criminal justice prison trip enlightened the minds of his students. Among the many efforts in his career at AHS, he was also the Senior Class Advisor and Student Council Advisor. Dan began his love of sports by playing football and lacrosse. His early career of coaching included both playing and coaching for the professional lacrosse team, Team Pepsi, and his high school sports in Peekskill, Yorktown, Sleepy Hollow, and Ardsley which led him to a career in coaching college lacrosse at Pace University, Mount Saint Vincent, and Manhattanville College. His 400+ wins made him feel on top of the world. In 1999 he took his Pace Lacrosse team to win the Northeast-10 Conference. The only one in their history. He became the National Coach of the Year. In 2000, while at Manhattanville, he became the Knickerbocker Coach of the Year. In 2018, Mully was inducted into the Pace University Hall of Fame. Mully enjoyed working closely with the Ardsley Police Department. His internship with them led to many tales and discussions! His love for helping students led to him receiving a PTA Jenkins Award and the Thomas J. Figlia Memorial Award. For the man who never needed a microphone to speak to a large crowd…his voice and memories will continue to be heard throughout the community. In lieu of flowers, donations can be made in Memory of Coach Mulholland to Pace Lacrosse. Donations can be made through www.pace.edu/settersclub Please designate men’s lacrosse in the appropriate boxes and In Memory of Dan Mulholland. Mass of the Resurrection 11:00AM Wednesday Sacred Heart Church, Dobbs Ferry. Visiting 2-8pm Tuesday Edwards-Dowdle Funeral Home, Dobbs Ferry.

The family of Daniel J. Mulholland Jr. created this Life Tributes page to make it easy to share your memories.

Send flowers to the Mulholland family.