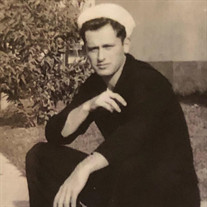 David Leo Kass, age 89, passed away on May 17, 2021 after falling ill in February. He is survived by his four sons Jerry, Stephen, Brian and Larry and eight grandchildren, Miranda and Taylor (Jerry), Krystalyn and Stephen (Stephen), Emily and William (Brian), Sarah and Julia (Larry). He was a resident of Dix Hills, NY for 28 years before retiring to Reynolds Plantation, Greensboro, GA in 1996. In December 2017, he moved to Carlyle Place, Navicent Health in Macon, GA, where he resided until his death. Like his father and brothers before him, Mr. Kass served in the military during time of war. In April 1951, at 19 years old, he enlisted in the Navy. He served in the U.S. Navy Air Force during and past the end of the Korean War. In April 1955, at 23 years old, he was honorably discharged. He met his wife Suzanne Doffing in Summer 1958 and they wed June 1959 in Wabasha, MN. He remained devoted to her until she passed in 2002, surrounded by him and his four sons. Mr. Kass was likewise surrounded by his four sons when he passed May 17, 2021. A viewing with eulogy delivered by his sons was held on May 22, 2021, at the Edwards-Dowdle Funeral Home in Dobbs Ferry, NY. It was followed by a funeral at Ferncliff Cemetery, Hartsdale, N.Y. including a Navy Honor Guard for Mr. Kass and, at his prior request, a Marine Honor Guard for his father, George Godfrey Kass. His father had served in World War I, was twice injured in combat for which he received two purple hearts, remained active through the 1918 Armistice, and was honorably discharged, yet had never received military honors at his own funeral. Mr. David Kass was laid to rest beside his wife, his parents, and other family. We love you, our eternally devoted husband to our mother, dear father, and beloved grandfather.

David Leo Kass, age 89, passed away on May 17, 2021 after falling ill in February. He is survived by his four sons Jerry, Stephen, Brian and Larry and eight grandchildren, Miranda and Taylor (Jerry), Krystalyn and Stephen (Stephen), Emily and... View Obituary & Service Information

The family of David Leo Kass created this Life Tributes page to make it easy to share your memories.

Send flowers to the Kass family.