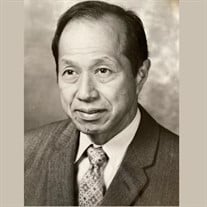 Dr. Samuel S. Koide “Sab” died at his Dobbs Ferry, NY home surrounded by family on April 2, 2021. Born in Honolulu, HI on October 6, 1923, he was the fourth of twelve children of Sukeichi and Hideko Koide. He was predeceased 6 weeks prior by his beloved wife of 61 years Dr. Sumi Mitsudo Koide. He is survived by his sons Mark (Karen Li) of Mendham, NJ and Eric (Ling Chen) of Los Gatos, CA and seven grandchildren, Jennifer, Thomas, Theodore, Yuki, Sachi, Kinu and Aki. He is also survived by his brothers Masanori, Frank and George and his sister Aileen Serikawa all of Honolulu, HI. He was predeceased by his daughter Sumi Lynn. Dr. Koide retired as Senior Scientist of Biomedical Research at the Population Council where he also served as Assistant Director in 2003 after 38 years on staff. He held faculty positions at the Sloan Kettering Institute for Cancer Research, the Rockefeller University and the Cornell Medical School. Dr. Koide received his MS, MD and PHD from Northwestern University. He was on the medical staff at Northwestern University Hospital in Chicago and the Memorial Hospital in New York. He published over 300 peer reviewed studies primarily in the field of reproductive biology and mentored dozens of postdoctoral fellows. A graduate of the University of Hawaii in 1945, he received their Distinguished Graduate Award in 1996 and the Distinguished Alumni Award in 2006. He was a summer researcher for over 20 years at the Marine Biological Laboratory in Woods Hole, MA. Sab may have been best known for his endurance sports career which he began at the age of 52. In triathlon, he was an Honorable All American in 1989 for his age group. In running he twice won the NYC Marathon for his age group. He was also named the 2004 Male Runner of the Year by the Millrose AA and the 2005 Runner of the Year age group by the New York Road Runner’s Club. Sab’s proudest achievement was serving his country in World War II. As a Japanese American, he felt a tremendous responsibility to his country and trained in the Military Intelligence Service Language School of the US Army. He served overseas in the Philippines and in Occupied Japan, achieving the rank of First Lieutenant. He had the historic oddity of having been a witness to the Japanese attack on the island of Oahu on December 6, 1941 and the terrorist attack on Manhattan on September 11, 2001. The family requests that in lieu of flowers, donations be made in his name to MBL Development, 7 MBL Street, Woods Hole, MA 02543

The family of Dr. Samuel S. Koide “Sab” created this Life Tributes page to make it easy to share your memories.