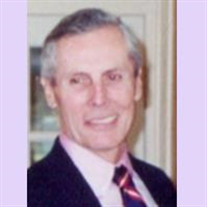 Edward J. Vickers, 88 passed away peacefully on March 8, 2022. Formerly of Manhattan, he passed away at Catholic Hospice in Holy-Cross Hospital in Fort Lauderdale, Florida with his wife by his side. Born in the Strathmore area of Syracuse, he was a resident of Manhattan for over 68 years. He graduated from the Cathedral Academy, Dean Academy, and the University of Pennsylvania. He worked in finance his entire career and retired from JNK Securities in 2021. He was one of the longest serving brokers in the history of the New York Stock Exchange. Ed loved football, basketball, baseball, golf, and good food. In high school he played football, basketball and baseball alongside his brothers. He went on to play semi-pro baseball as a catcher for the Syracuse Chiefs in 1956. His fondness for golf began at the heels of his father and family and continued throughout his life. He was a lifelong member of the Westchester Country Club in Rye, NY, a place he often referred to as his second home. Always an athlete, he also played squash at the University Club in Manhattan where he was also a longtime member. He especially enjoyed Christmastime in New York, with all the decorations and ambiance. Edward was predeceased by his parents, Dr. William Vincent Vickers and Teresa Driscoll Vickers and; brothers, Reverend William D. Vickers and Robert D. Vickers. Surviving are his wife of 5 years, Dorothy Vickers of Manhattan; sister, Suzanne M. Vickers of Mattydale; sister-in-law, Helen Vickers of Camillus; nieces, Kathleen A. Vickers of Camillus, Dr. Susan T. Vickers of Camillus, and Lieutenant Colonel William E. (Christine) Vickers, USMCR, Retired of Fairfax, VA; grandniece and grandnephew, William and Grace Vickers of Fairfax, VA. He also leaves behind his dearest friend since childhood, Donald Burke of Ormond Beach, Florida, and his dear friend and caddy for over 40 years, Herman Jacoby of Brewster. Relatives and friends may call on Monday, March 14 from 1PM to 4PM at Edwards-Dowdle Funeral Home where services will be held Tuesday, March 15, 11AM. Edward will be laid to rest in Ferncliff Cemetery, Hartsdale, NY. In lieu of flowers, the family requests that donations be made to the Alzheimer's Disease Research Center. Please mail to Executive Director, Alzheimer's Disease Research Center, Washington University School of Medicine, Campus Box 8111, 4488 Forest Park Blvd., Suite 130, St. Louis, MO 63108.

Edward J. Vickers, 88 passed away peacefully on March 8, 2022. Formerly of Manhattan, he passed away at Catholic Hospice in Holy-Cross Hospital in Fort Lauderdale, Florida with his wife by his side. Born in the Strathmore area of Syracuse,... View Obituary & Service Information

The family of Edward J. Vickers created this Life Tributes page to make it easy to share your memories.

Send flowers to the Vickers family.