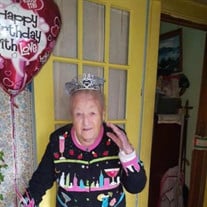 Elizabeth Gavacs Sente was born at her home on January 5, 1921, in Hastings-on-Hudson, N.Y., delivered by a midwife to Imre and Margaret Marhoffer Gavacs, who emigrated to the U.S. from Hungary. She graduated from Hastings-on-Hudson public schools, attended business school for one year, and worked in NYC for the Lorillard Tobacco Company from 1940 to 1951. During World War II she also volunteered with the Red Cross and Grasslands Hospital. After the war, she started dating Lewis Sente. In 1949 they were married and had three children: Margit, Paul and Elizabeth. Although Elizabeth outlived her husband of 54 years, she never complained, and always accepted life’s challenges with a firm belief in Jesus Christ, her Savior. She was a typical 1950’s housewife: wash on Monday, change bedsheets on Tuesday, ironing on Wednesday, cleaning the kitchen on Thursday, housecleaning on Friday, running errands and shopping on Saturday, and church on Sunday followed by a big family dinner (including her parents and often her brother and his family). She loved cooking, baking, and making jellies, and always stressed the importance of keeping busy. For many years she was caretaker for her mother, to whom she was devoted. Elizabeth was a die-hard New York Yankees baseball fan and religiously followed the team on TV. She traveled extensively with her family, including an unforgettable trip to Hungary where she was anointed “Queen for a Day” in the village of Tes where her mother was born. She also spent many summers with her daughter and son-in-law at their lake house in Sunapee, New Hampshire. When asked about her key to an extraordinarily long life, she always answered: “all things in moderation.” Elizabeth will be sorely missed by friends and relatives but mostly by her three children: Margit Sente Buonicore (Anthony), Paul Sente (Mary Elizabeth), and Elizabeth Sente LaRosa (Nick); her four grandchildren: Margit Carleen Buonicore Costanzo (John), Anthony Lewis Buonicore, Elizabeth Ann Buonicore (Steve Terifay) and Stephanie LaRosa; her five great children: Isabella Rose Costanzo, Christian John Costanzo, Lorelei Buonicore, Colton Joseph Terifay and Jayden Charles Terifay; and a niece, Nancy Gavacs Brunson, and nephew, James Gavacs. She was a cherished mother, grandmother, great grandmother, aunt, and friend to all who had the privilege to know her.

Elizabeth Gavacs Sente was born at her home on January 5, 1921, in Hastings-on-Hudson, N.Y., delivered by a midwife to Imre and Margaret Marhoffer Gavacs, who emigrated to the U.S. from Hungary. She graduated from Hastings-on-Hudson public... View Obituary & Service Information

The family of Elizabeth Gavacs Sente created this Life Tributes page to make it easy to share your memories.

Send flowers to the Sente family.