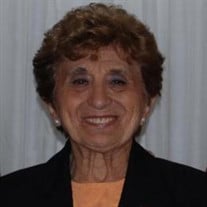 Fannie (Fran) Clare Macri, age 97, a lifelong resident of Ardsley, NY, passed away on May 3, 2020. Fran was born in 1922 in an apartment above what was then known as the “Perillo’s Store”, located on Ashford Avenue. A few years later the family moved one building east to the top floor apartment in the Johnson Building. Both buildings were demolished in the early 1950’s for the constructions of the NYS Thruway. In the 1930’s the family moved to a house on Judson Avenue. Fran was the devoted daughter of the late Antonio and Maria Michele, and loving sister of Maria (deceased) and Anthony. Fran married the love of her life, Nicholas Macri, in 1948. She was the very last bride to be married in Our Lady of Perpetual Help Church at its original location in the Village center. Fran and Nicholas were married for 62 years, until Nicholas’ death in 2010. Together they raised six children, Barbara (Michael), Lois, James, Kenneth (Gail), Sue Ann (Bertram) and Nicholas, Jr. (Cathy). In addition to her children, Fran is survived by 9 grandchildren - Christopher (Amanda), Allison (David), Kristin (Craig), Ashley, Michelle, Taylor, Nikki, Nicholas and Morgan – and four great grandchildren. Fran was a graduate of Ardsley High School, where she was a member of the Honor Society. While in school she played intramural basketball and was a high school cheerleader. She also played the base fiddle and the piano. After graduation she was a secretary at Stauffer Chemical Company in Chauncey, and later was transferred to the company’s New York City headquarters in the Graybar Building. Fran left the business world to raise her family and become a full-time homemaker. She was a volunteer for the American Heart Association fund drives and at the local polls on Election Day. She was many times a class mother and Girl Scout volunteer. She filled her home with music, dance and culture. She is fondly remembered for her kindness and generosity, as well as for the home made pizzelli and biscotti she shared in times of joy and in times of sadness. Fran was a faithful parishioner of Our Lady of Perpetual Help Church in Ardsley, where she sang in the church choir. One of her fondest memories was being a member of a group of young Catholic woman who raised money for charitable causes, and who remained friends for their entire lives. Services will be private at this time and a memorial Mass will be scheduled at a later date. In lieu of flowers, the family requests that contributions be made to the charity of one’s choice.

The family of Fannie Macri created this Life Tributes page to make it easy to share your memories.