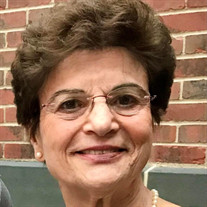 Gay Alice Silverman passed away November 26, 2021 at the age of 78. Gay was born on January 5, 1943 to Samuel and Ann Plancher. Raised in the Bronx, she was a competitive swimmer, achieving national ranking in backstroke. She completed her Bachelor’s degree in Physiology and Psychology with a minor in education at the age of 19. Shortly thereafter, she obtained her Master’s degree. She married Alan Jay Silverman with whom she began her family with her two sons, Ira and Robert. Gay moved to her home in White Plains, where she lived the remainder of her life, dedicated to helping anyone she encountered. Gay began her teaching career as a special education teacher in New York City. She then taught in a city youth home for battered and abused children. At the same time, she and Alan volunteered as swim coaches for the Bronx Union YMCA. Even as a young adult, she sought to give of herself to others, continually trying to improve their lives and help them to become better people for having encountered her. When she started her family, she retired from teaching and moved to White Plains. In 1974, Gay and Alan founded the Silver Streaks Swim Club. While Alan passed in 1994, Gay continued to dedicate her time and energy to her swimmers until her passing. Generations of swimmers and their parents know her for her focus on development of the person as primary over the development of the swimmer. With a philosophy of “Do your best to be your best” she guided her kids with life lessons as much as guiding their swimming technique. She is remembered as a mentor to her “kids” spanning over 50 years. In the early 1980s Gay founded Streaks Swimwear. Beginning with her self designed boys competitive swimsuit, she quickly expanded into girls competitive swimwear. Creating several custom patterns, she outfitted countless swimming and diving teams and, when not coaching, would still be found at swimming and diving meets with her suits for decades. Fondly known as “the suit lady” kids would look forward to finding the perfectly unique suit to meet their personality. Gay is survived by her son Ira Silverman and his wife Laurie, her son Robert Silverman and his wife Lisa, and her grandchildren Allison Raber (Ian), Laura Silverman, Katherine Silverman, Andrew Silverman, Jake Silverman, Luke Silverman, and Michael Silverman. In lieu of flowers, donations can be made to: Swim Across America Po Box 217 Larchmont, NY 10538-0217 Please reference “Team Gay Silverman” on the donation checks. To Donate Online Click: https://www.swimacrossamerica.org/site/TR;jsessionid=00000000.app324b?px=1715489&fr_id=5764&pg=personal&NONCE_TOKEN=21CA33FCE5B990D0271CF69E1A01C24A SERVICES WILL BE LIVE STREAMED STARTING AT THE FUNERAL HOME CLICK TO WATCH: https://youtu.be/PYG10MkzmH0

Gay Alice Silverman passed away November 26, 2021 at the age of 78. Gay was born on January 5, 1943 to Samuel and Ann Plancher. Raised in the Bronx, she was a competitive swimmer, achieving national ranking in backstroke. She completed her... View Obituary & Service Information

The family of Gay Alice Silverman created this Life Tributes page to make it easy to share your memories.