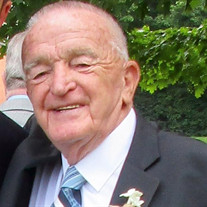 George E McHenry passed in peace on Saturday December 21, 2019 at the age of 94. He was born in Dobbs Ferry New York on June 14, 1925 to William A. and Johanna (O’Connor) McHenry. Preceded in death by his wife Jean, daughter Patricia and son Michael. Loving father of George Jr and daughter in law Betty Jo (Tyson) McHenry. Grandfather of Elizabeth, Paul, Patricia, Suzanne and her husband Andrew Herron. Great Grandfather of Oliver Herron. He was further survived by nieces and a nephew and was very close to his niece Karen McHenry Gluntz as well as his cousin John Young. George had many wonderful friends, including special friends Phyllis Lyke, Doris Schwarzwalder, Brian and Mary Hartnett and many others. George had one brother and six sisters who preceded him in death. He fought in World War 2 in France and Germany as a Sargent in the 574th AAA Batalion. He was a residential and commercial milkman for Borden’s and Dellwood Dairy, sold real estate, was a volunteer fireman for Ogden Engine in Dobbs Ferry for almost 50 years, a volunteer ambulance driver and was very involved in the activities of his children and grandchildren. George was a devout Catholic through his life serving as an usher for many years at Sacred Heart Church in Dobbs Ferry and St. Theresa in North Ft. Myers Florida. Gramps and or Big George as we called him could tell one hell of a story and we will miss that tremendously. He was loved by his many friends and family, he truly had a wonderful life! A viewing will be held at Edwards-Dowdle Funeral Home, Dobbs Ferry on Friday, December 27th from 3-5pm which will be followed by a mass in celebration of his life held at Sacred Heart Church, Dobbs Ferry on Saturday, December 28th at 10AM and burial at Mount Hope Cemetery. In lieu of flowers please consider making a contribution to Ogden Engine of the Dobbs Ferry Fire Department by mail to : Ogden Engine #1, 203 Ashford Ave, Dobbs Ferry NY 10522.

George E McHenry passed in peace on Saturday December 21, 2019 at the age of 94. He was born in Dobbs Ferry New York on June 14, 1925 to William A. and Johanna (O&#8217;Connor) McHenry. Preceded in death by his wife Jean, daughter Patricia and... View Obituary & Service Information

The family of George E McHenry created this Life Tributes page to make it easy to share your memories.

Send flowers to the McHenry family.