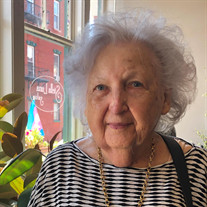 Gloria Blanck passed away peacefully in the early hours of Friday, December 6, 2019 at her home in Dobbs Ferry, NY. She was 95 years old. Born Gloria Bright in Yonkers, NY, she graduated from Gorton High School and attended Barnard College on a music scholarship, studying piano and organ. Gloria’s stories of campus life in 1942 were tempered with sadness for classmates heading off to war. She volunteered for The Red Cross and shared memories of walking through Manhattan with streetlights dimmed to protect the city from attack. Gloria graduated from Manhattan’s Katharine Gibbs School, where she excelled; her pianist’s fingers typed 120 words per minute -- no mistakes. On graduation, she worked for the Yonkers School Board. In the early 1960s, she joined Association Sterling Films in Manhattan, later acquired by MacMillan Publishing. A lifelong film fan, it was a perfect fit. Her career there extended more than two decades. Gloria married William Blanck of Yonkers in 1949. The couple moved to Dobbs Ferry in 1950. While Bill worked in Manhattan, Gloria stayed home with her young daughters. An early work-from-home mom, she adored typing manuscripts for then-Dobbs Ferry resident, FDR scholar William Leuchtenberg. Gloria was an inspiring mother and a joy to know. She was a powerhouse executive secretary, a talented chorister and pianist, an arts lover, and an activist. In the 1960s, she volunteered for a project fighting racial housing discrimination in Westchester County. She also fought development that threatened her beloved Hudson River and worked with Friends of the Wicker’s Creek Archaeological Site to protect shell mounds of Dobbs Ferry’s indigenous Native Americans, the Wickquasgecks of the Lenni-Lenapi nation. Piano was Gloria’s lifelong passion; she was as adept at playing Chopin and Bach as she was Scott Joplin rags. In the 1990s, she accompanied Sweet Voices of Liberty, a one-hundred voice children’s choir at Liberty Elementary School, Nyack, NY, under the direction of her son-in-law, Kenneth Potter. Blessed with a pure soprano voice well into her seventies, she sang with the choir at Zion Episcopal Church in Dobbs Ferry. Gloria also served on Zion’s vestry during Father Richard McKeon’s tenure and helped him put together the church’s program every Saturday night. She was a founder of the church’s thrift shop, and took joy in its well-stocked book room. Even in her decline, Gloria continued to visit the thrift shop most Thursdays, greeting all who entered. Gloria possessed a generous spirit, boundless energy, and grace in the face of setbacks and age. Her dinner parties were delicious and full of good stories. She made the world’s best lemon bars and enjoyed the occasional apple martini. Whether teasing the air raid warden as a teen during blackouts or fooling her husband with a temporary tattoo, she reveled in an excellent prank. Gloria loved the Episcopal Church, her family, and her devoted caregivers, the “day ladies:” Lilian Walters, Daphne Lawrence, and Patricia Munroe; and the “night gents,” Abuu Koneh and Daniel Asamoah. She will be missed by her many friends, her family, and the herd of deer who stood silent guard by her house the night she died. Gloria is survived by her daughters, sons-in-law, and foster son: Susan and Eric Benson, of Seattle, WA; Christine and Kenneth Potter, of Valley Cottage, NY; and Thom Johnson of Peekskill, NY. She was preceded in death by her husband, William Blanck, her infant son, Peter, and her parents, Edwin and Ethel Bright. Gloria’s memorial service will be held at Zion Episcopal Church in Dobbs Ferry on Saturday, January 11, 2020 at 2 pm. In lieu of flowers, donations may be made in her honor to Zion Episcopal Church , Hospice of Westchester , or the American Civil Liberties Union .

Gloria Blanck passed away peacefully in the early hours of Friday, December 6, 2019 at her home in Dobbs Ferry, NY. She was 95 years old. Born Gloria Bright in Yonkers, NY, she graduated from Gorton High School and attended Barnard College... View Obituary & Service Information

The family of Gloria Blanck created this Life Tributes page to make it easy to share your memories.

Gloria Blanck passed away peacefully in the early hours of Friday,...