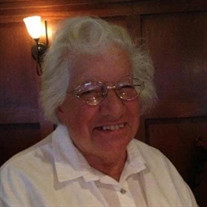 Gloria M. Brkich, a resident of Hastings-on-Hudson, passed away peacefully on April 22, 2021. She was 88 years old. Gloria was born on July 25, 1932 in Bronx, NY to the late Angelo and Mary (Mendillo) Dell’Armo. She moved to Hastings in 1958 upon her marriage, and resided in the house she and her husband built until shortly before her passing. Locally, she was an active member in the community for many years and enjoyed spending time with the Hastings Senior Group (Busy Bees). In years past, Gloria led the Busy Bees and organized many trips and activities for her fellow seniors for over 15 years, including an annual week-long trip to Woodloch Pines in the Pocono Mountains in Pennsylvania, trips to Atlantic City, and weekly Bingo games at the Hastings Senior Center. She often spoke fondly to her family about the fun times she had with her friends at Woodloch Pines. Gloria also represented the seniors of Hastings-on-Hudson with years of selfless volunteer service as the senior liaison member of the Hastings Parks & Recreation Commission. She stood up for the seniors in Hastings, and ensured the they received funding for the senior programs she and others organized and loved. Gloria received numerous awards for her dedication and commitment to the seniors in her community. On January 27, 2017, she was honored at the 1st Annual Senior Honorees Program by the Town of Greenburgh and was presented with their Super Senior Award for her continuous and inspiring contributions to the success of the community. At that ceremony, she also received a Certificate of Recognition signed by Senator Andrea Stewart-Cousins and a Certificate of Merit from the New York State Assembly. On September 20, 2018, Hastings Mayor Peter Swiderski and Village Manager Francis Frobel presented Gloria with a letter of appreciation from the Village for all her years of volunteer service as a member of the Parks & Recreation Commission. Commission members had the opportunity to thank Gloria, who attended with her family, for her commitment over the years and wished her well as she retired from the Commission. Gloria is survived by her children, Douglas, Richard, Susan, and Deborah, as well as her sister Anna Dell’Armo Mauro and brother Salvatore Dell’Armo (Anne). She also leaves behind her three grandchildren, Alise, Alanna, and Austin, and many nieces and nephews, great-nieces and great-nephews, and great-great nieces and nephews. Besides her parents, she was predeceased by her husband Rudolph in 1998, as well as seven brothers and sisters.

Gloria M. Brkich, a resident of Hastings-on-Hudson, passed away peacefully on April 22, 2021. She was 88 years old. Gloria was born on July 25, 1932 in Bronx, NY to the late Angelo and Mary (Mendillo) Dell&#8217;Armo. She moved to Hastings in... View Obituary & Service Information

The family of Gloria M. Brkich created this Life Tributes page to make it easy to share your memories.

Gloria M. Brkich, a resident of Hastings-on-Hudson, passed away...

Send flowers to the Brkich family.