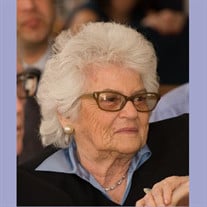 Harriet Kopelman began her journey on Nov. 23, 1929, in the Bronx, New York, one of two children born to Bernard and Margaret Ressler. She was a highly energetic child, touched with grace and spirit. She spent copious hours poring over books that grew her vast imagination. Shortly before she enrolled in City College of New York, Harriet began dating an extremely smart and clever young man named Milton Kopelman, who was a good friend of her older brother Irving. Harriet and Milton were married on Christmas Day in 1949, a union that would last nearly 70 years. Their bond was incredibly strong and their love grew over the years. Anyone who spent time with them could see how deeply they supported and cared for each other. Harriet had an uncanny command of the English language, mastering the New York Times crossword puzzles in record time, annihilating the competition in Scrabble (poor Milton!), and voraciously reading novels of all plots and sizes in lightning speed. She participated in the TV game show Concentration and won a trip to Canada and a bedroom set. Fiercely bright and witty, she sacrificed the potential of a career outside the home to stay within the household nurturing her three children, Steve, Ken, and Donna. Harriet had a diverse set of interests throughout the decades. She was an adept mahjong player, enjoyed classical music and opera, played golf during the summers with Milton (she didn’t hit the ball far but she would hit it straight down the fairway), enjoyed clever TV shows and movies (The Man From U.N.C.L.E. was one of her favorites), and always loved good food. In fact, she was an excellent cook with a number of specialty dishes—from lamb chops, meatballs and spaghetti to matzo brei, and Milton’s favorite, liver. Harriet took pleasure in crocheting, teaching stenography and typing at Grace Dodge High School in the Bronx after the kids were older, and winning small pots of money from relatives and friends in poker games. She loved spending summers with Milton in the Catskills, welcoming and relishing visits from her children and grandchildren. She lavished attention on all of her beloved grandchildren, who have wonderful memories of times spent together. Harriet is survived by her three children, Steve, Ken (Liz), and Donna (Mark), her six grandchildren: Jesse (Susan), Nicole, Andrew, Jared, Samantha, and Rebecca; and two great-grandchildren, Aaron and Hannah. A private service was held on Feb. 23 in Paramus, New Jersey, and donations in Harriet’s memory can be sent to the charity of your choice.

Harriet Kopelman began her journey on Nov. 23, 1929, in the Bronx, New York, one of two children born to Bernard and Margaret Ressler. She was a highly energetic child, touched with grace and spirit. She spent copious hours poring over books... View Obituary & Service Information

The family of Harriet Kopelman created this Life Tributes page to make it easy to share your memories.