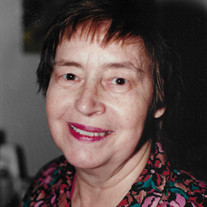 Helen Schwanger Gorelick passed away peacefully at the age of 96 on October 21, 2019 at Cabrini Nursing Home in Dobbs Ferry where she had lived for the past four years. She is survived by her loving husband, Jack and three children, James Russell and Deb Wolf of Lancaster, Pa, Michael and Ellen Carter Gorelick of Phoenicia and Anna and Paul Sterne of Dobbs Ferry. A resident of NYC since 1949 she was a frequent visitor to Dobbs Ferry and was a constant figure in the lives of the four Sterne grandchildren. She will be greatly missed by Rachel and Max Haot, Erica and Zahir McGhee, Katie and Brent Gunderson and Ben Sterne, as well as, by their many friends who knew her as Nana. She will also be missed by grandchildren, Jolene Wolf Harrison, Tina Wolf Groff, Katie Lynn Wolf, Tiffany Wolf Buckwalter and Sylvia Gorelick. In addition, she will be greatly missed by her sister and brother in law, Barbara and Ernie Florio of Media, Pa and nieces, Marsha Florio and Julie Soriero of Cambridge, Mass. She is also survived by 9 great grandchildren. Born outside Elizabethtown, Pennsylvania, on April 12, 1923. She was raised by her grandparents Tillman and Barbara Alice, a blacksmith and a midwife in the Mennonite Church though she never officially joined. She excelled in her one-room schoolhouse, and graduated Elizabethtown High School two years early. Helen worked as a maid and nanny for a well-to-do family in Lancaster, Pennsylvania, and then later began working at the RCA plant in Lancaster. She became active in the Union of Electrical Workers. There she met Jack Gorelick, an organizer for the union. Helen married Jack on November 26, 1948. In 1949 they moved to New York City. Helen worked in Macy’s until she started a family In 1958 Helen began attending classes at City College of New York, while working as a nursery school teacher. She also studied with a rabbi to convert to Judaism. In 1967 Helen graduated college and began teaching kindergarten at PS 113 in Harlem, where she remained for 25 years. Helen received a Master's in Education at Columbia Teachers College. Helen loved Balzac, gardening, traveling, Rachel Maddow, museums, carnival glass, and shrimp. She hated cats and racism. Helen was proud of having integrated a swimming pool at a Lancaster park in 1948. She will be missed by family and many friends. Anna and Paul will be sitting shiva Thursday, October 24, 2019 and Friday, October 25, 2019 from 4:00pm to 9:00pm at their home on Cricket Lane. The Memorial for Helen Gorelick will be Sunday, November 24 at 2pm at the Union Temple of Brooklyn 17 Eastern Parkway Brooklyn NY 11238. A reception will follow at the Brooklyn Public Library across the street.

Helen Schwanger Gorelick passed away peacefully at the age of 96 on October 21, 2019 at Cabrini Nursing Home in Dobbs Ferry where she had lived for the past four years. She is survived by her loving husband, Jack and three children, James Russell... View Obituary & Service Information

The family of Helen Gorelick created this Life Tributes page to make it easy to share your memories.

Helen Schwanger Gorelick passed away peacefully at the age of...