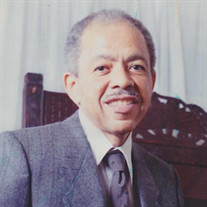 OBITUARY for Dr. James Neville Lewis James Neville Lewis, known as Neville, or &#8216;Nev&#8217; as he was called by those close to him, was born to Olive Michael Lewis of St John&#8217;s, Antigua, and James Archibald Lewis of Bethesda, Antigua,... View Obituary & Service Information

The family of Dr. James Neville Lewis created this Life Tributes page to make it easy to share your memories.

Send flowers to the Lewis family.