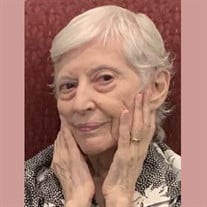 Jennifer Lifrieri Ries, a long-time resident of Hastings-on-Hudson, passed away peacefully on April 12th, 2021 at Calvary Hospital. She was predeceased by her beloved husband of 46 years, Dale Ries, and is survived by her three children, daughters Alicia and Marietta and son Christopher. In addition, she is survived by her daughter-in-law Jennifer Ries, her son-in-law Matthew Lavicka, and her three grandsons: Max, Cal and Reese Lavicka. A dear sister of the late Josephine Imbrogno, Thomas Lifrieri and Dora Halley, she was also a loving Aunt to several nieces and nephews, and a dear friend to many. Jennifer was born “Giovannina Rose Lifrieri’ on July 30, 1932 in Charleston MA, to the late Saverio Lifrieri and Angelina (DeRose) Lifrieri, both of Lappano, Italy. Jennifer was passionate about her Italian heritage, organizing many family journeys back to Lappano for herself and family members, including most recently her grandsons. Jennifer’s love for traveling also led her to many other beautiful places in the world, such as Paris, Prague and Tunisia. A devoted scholar and spelling bee champion in high school, Jennifer won a four-year scholarship to Emmanuel College in Boston, earning a BA in Mathematics in 1954. Jobs in engineering took Jennifer from Boston to Washington DC to New York City and, in 1961, to London where she was a pioneer female computer programmer. It was also there where she met, fell in love with and married Dale Ries. Back in NYC, newlyweds Jennifer and Dale especially enjoyed going to theater, museums and restaurants before moving to the suburban town of Hastings with a young family in 1965. In the early 1970s, Jennifer advanced her personal, political and social growth through the feminist movement. She embraced new ways of thinking and building supportive relationships with women in Consciousness Raising Groups. She developed her political and activist voice through participating in demonstrations, marching for equal rights, lobbying national politicians and becoming an expert in grassroots organizing. She cultivated her leadership strengths and qualities, serving as President of the National Organization for Women (NOW) as well as other organizations such as Catholics for a Free Choice. She was a founder of My Sister’s Place in Yonkers, the first battered women’s shelter in Westchester County. Through it all, Jennifer’s tireless efforts resulted in positive lasting changes for women, families and communities. In the early 1980s, Jennifer decided to return to the professional world of computers, and with great success, becoming the PC Manager at a prestigious Manhattan law firm for over 20 years until her well-earned retirement in 1998. A lifelong learner, Jennifer pursued new areas of growth and activism well into her 80s, including tai chi, yoga and meditation practices. Jennifer was a feminist, spirited humanist and optimistic believer in progressive change until her last breath. Visitation will be held on Friday, April 16th from 4-8pm at Edwards-Dowdle Funeral Home, Dobbs Ferry. The funeral will be held there on Saturday morning, April 17th at 10am. Interment will follow at Mount Hope Cemetery, Hastings-on-Hudson. In lieu of flowers, please send memorial donations in memory of Jennifer Ries to Calvary Hospital at https://fund.calvaryhospital.org/ways-to-give/give-once/

Jennifer Lifrieri Ries, a long-time resident of Hastings-on-Hudson, passed away peacefully on April 12th, 2021 at Calvary Hospital. She was predeceased by her beloved husband of 46 years, Dale Ries, and is survived by her three children, daughters... View Obituary & Service Information

The family of Jennifer Lifrieri Ries created this Life Tributes page to make it easy to share your memories.

Send flowers to the Ries family.