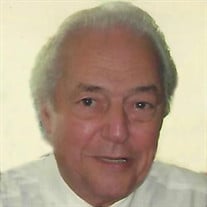 John L. Franco passed away on January 7, 2021 in Bethel, CT. John was 91 years old and was born in Manhattan to parents Giuseppe and Lucia Serino Franco, who immigrated from Maiori, Italy. John served in the U.S. Army from January 1951 to October 1952 in the Korean War. He married Patricia Ann Amato at Our Lady of Mount Carmel Church in the Bronx in 1954. John considered Patricia his one and only wife and he never re-married after her passing in 1986. John also lived in the Bronx and then Mt. Vernon for a time, where he owned a small Italian-American grocery store. In 1960 John and his brother Joseph built their dream house in Dobbs Ferry. John worked as a laborer, then construction foreman, and then as a salesman at Imperia Brothers in Pelham Manor, until his retirement in 1991. He was a member of the NYS Laborers’ Union Local 235. Upon retirement, John moved to Ft. Lauderdale, Florida where he lived for 16 years. He then returned to New York to be closer to his family and settled in Bedford Hills, then Danbury, CT and most recently Bethel, CT. John was a practicing Catholic and was very close to his family and also his group of friends that he had since childhood from “the old neighborhood”. He enjoyed singing and dancing and getting together with his in-laws on the weekends, for karaoke. John is survived by his loving children, Janet (Bob) Kozma, Lori Franco, Sherry (David) Gonzalez, Joseph (Vivian) Franco and John Franco (fiancée Karen); his grandchildren, Christopher (Megan) Bottiglieri, Danielle (Dino) Verardo, Jennifer (John) Benfield, Cara Giorno, Joshua and Patricia Gonzalez, Joseph (Rebecca) Franco, Vincent Weaver, and Jamie, Michelle and Dylan Franco; his great-grandchildren, Ella and Gia Verardo and Chloe and Asher Bottiglieri, as well as many nieces, nephews and cousins. In addition to his wife, Patricia, and his parents, John was pre-deceased by his beloved grandson and namesake John L. Franco, sisters Mary Franco and Anna Imperia and brothers Carmine and Joseph. Due to COVID-19, services will be private, but the family asks that you keep John in your prayers. He will be laid to rest next to his beloved wife at Gate of Heaven Cemetery in Valhalla. In lieu of flowers, donations to the John L. Franco ’15 Memorial Scholarship Fund at New York Law School, in memory of his beloved grandson, would be appreciated. Donations can be made here: https://alumni.nyls.edu/john-franco.

John L. Franco passed away on January 7, 2021 in Bethel, CT. John was 91 years old and was born in Manhattan to parents Giuseppe and Lucia Serino Franco, who immigrated from Maiori, Italy. John served in the U.S. Army from January 1951 to October... View Obituary & Service Information

The family of John L. Franco created this Life Tributes page to make it easy to share your memories.

Send flowers to the Franco family.