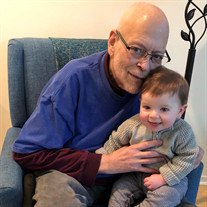 John Fredrick Golden died February 13, 2020 at age 65 of pancreatic cancer. John was born June 19, 1954 in Bronxville, NY, son of Gladys (Stern) and Oscar Golden, and brother of Roger and Robert. He was educated at the Horace Mann School, Vassar College, and the American Film Institute, Directing Program. He worked in various areas of the film and media industry, writing scripts for Columbia Pictures, Universal and other studios; producing content for NBC, The History Channel, and A & E, among others; and directing the “Global Links” series for the World Bank (covering international economic and environmental issues), and a season of Saturday Night with Connie Chung. He wrote and directed several feature films, and worked on numerous media-based projects throughout the US, Europe, China, Africa and South America. He met his life partner, Lisa Niven, at college in 1976; they married in 1980, living in New York City, Los Angeles, Dobbs Ferry, NY and in the last year, Ossining, NY; and had two loving sons: Nicholas Niven Golden and Kyle Stott Golden. John was a person of extraordinary openness, honesty and inclusiveness. He was a person of deep and searching faith. He made friends in all walks of life wherever he went and his many relationships were infused with his unique generosity of spirit and sense of humor. “You never wondered for a second if he loved you.” John was a Deacon at the Irvington Presbyterian Church, a long-time friend of Bill, a member of the Director’s and Writer’s Guilds of America, a devoted practitioner of Aikido, and an avid lover of dogs. In addition to his wife and two sons, John is survived by Nick’s wife Deidre (Scorziello); his grandson Derek John; and his brother Robert. He will be dearly missed.

John Fredrick Golden died February 13, 2020 at age 65 of pancreatic cancer. John was born June 19, 1954 in Bronxville, NY, son of Gladys (Stern) and Oscar Golden, and brother of Roger and Robert. He was educated at the Horace Mann School, Vassar... View Obituary & Service Information

The family of John Fredrick Golden created this Life Tributes page to make it easy to share your memories.

Send flowers to the Golden family.