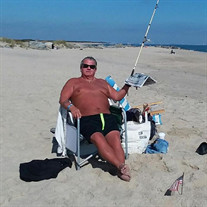 It is with a heavy heart that we are saddened to announce the passing of longtime Irvington resident, John Guy Williamson, also known as “Radar” or “Guy”. John passed away peacefully at home on April 22, 2022 after a long battle with cancer. John was born on October 13, 1953 and was 68 years old. He was born and raised in Yonkers, New York. He was the son of the late John “Jack” and Elizabeth “Betty” Williamson. John graduated from Sacred Heart High School in Yonkers and attended Westchester Community College. John was a proud Veteran of the United States Army having served from 1972 to 1974. He spent most of his younger years tending bar on Lake Avenue in Yonkers. He worked as a U.S. Postal Carrier for over 25 years in the Village of Irvington that he loved so much. John is survived by his beloved wife of 45 years, Maryalice Williamson, his three daughters, Tara Williamson, Katie Minella (Anthony) and Moira Kehayas (Terence) and five grandchildren Brooke, Sadie, Madison, George, and Kassidy. He was predeceased by his granddaughter Hailey Kehayas. John is also survived by his brother James Williamson and his sister Elizabeth Serbay (Raymond) and many additional family members. He had a love for fishing, hanging by the Hudson River and most of all vacationing down the Jersey Shore at his favorite place, Seaside Park. He found great joy that his family tradition has been passed on to so many friends along the way but most of all to his grandchildren. He was a proud grandfather, also known by the kids as their “Papa Guy”. He loved and adored every one of them. Nothing made him happier than being with the kids. He also greatly cherished his relationships with his nieces and nephews. He was a great friend to many people through the years. He was one of a kind and will be remembered and missed by all who knew him. Memorial Contributions may be made to the Wounded Warrior Project (https://www.woundedwarriorproject.org) or to GiGi's Playhouse Westchester (https://gigisplayhouse.org/westchester). Mass of the Resurrection Friday 9:30am Monastery Church of the Sacred Heart, Yonkers. Visiting Thursday 3-8pm Edwards-Dowdle Funeral Home, Dobbs Ferry.

The family of John Guy Williamson created this Life Tributes page to make it easy to share your memories.

It is with a heavy heart that we are saddened to announce the...

Send flowers to the Williamson family.