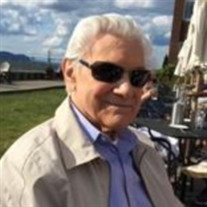 Joseph “Joe” Decharo passed away peacefully at the age of 91 on July 28 after a brief illness. Joe was born in the Bronx to Jennie and Stephen Decharo in 1929. He lived in the Bronx for 44 years and Yonkers for 42 before spending his final years in Dobbs Ferry. He was the fifth of six children in the family. His mother, a woman before her time, taught her 4 sons to cook, clean and take care of children noting that one day they would need to take care of their wives and children. Joe practiced that lesson throughout his life – middle of the night feedings, changing diapers, cooking meals and styling ponytails. He was predeceased by his adored wife, Joan (Joanie). He was devastated at losing her and missed her everyday. Joe leaves behind his four daughters: Diana Decharo, Joanna Regina, Stephanie Price and Barbara Decharo as well as his grandchildren: Jennie, Brandon and Brittany. He was a true family man and devoted his life to ensuring his family was always cared for. When times were their toughest, he still came through. His most enjoyable times were spent with family -- cooking big family dinners, cooking his grandchildren’s favorite meals and watching the Yankees, all of which should be done with a cup of coffee. If any of his daughters were cooking, he was suddenly standing beside them asking jokingly, “do you know what you’re doing?” and always made sure they were using the right knife for the job. He was an amazing grandfather. Watching his grandchildren’s favorite videos over and over, building with Lego, being their hairstyling model and letting them ride his back in the pool or at the beach. He drove them around, picked them up from school and swim lessons all the while concocting fantasy places where they were going to keep them entertained. He was an avid Yankee fan who almost never missed a game on TV. He’d pound the table and complain about the pitching, but the game was always on. Joe was a corporal in the army during the Korean War; serving in Japan and North Korea. He kept in touch with his army buddies and they would meet once a year for over 50 years. When his tour of duty was over, he came home and went on a blind date. On that date, he fell in love instantly with the joy of his life, Joanie. They were together for the next 60 years. They raised a family through thick and thin. When the family was still young and struggling, Joe worked as a roofer but always took one or two additional jobs to make ends meet. Even when he was working 7 days a week, he was always happy to get up early with his children and play or make them breakfast. After working hard all of their lives, Joe and Joan enjoyed the leisurely life together and were finally able to travel, visiting Italy twice, England, Aruba, Cape Cod and frequent trips to Disney World with their grandchildren. Joe finally found his calling as a letter carrier for the US Post Office. For over 30 years, he loved walking his route in the Bronx and getting to know the people he delivered mail to. He even maintained a close acquaintance to one of the waiters at a diner on his route who later began working at the Dobbs Diner. The Dobbs Diner was Joey’s “Cheers” for 25 years. As soon as he walked in he was greeted warmly by name by all the staff. By the time he got to his table his coffee was waiting for him, and if it was lunchtime, Yankee Bean soup. He maintained friendships with his Post Office buddies and continued meeting them once a month for breakfast until the end. They shared a love of the Yankees and Joe always enjoyed bantering with his buddies. Anyone who met him was immediately captivated by his thick white hair. He was very proud of it and enjoyed when people commented on it. What a legacy it is to be remembered and dearly missed by those who love you -- and to be remembered because of love.

Joseph &#8220;Joe&#8221; Decharo passed away peacefully at the age of 91 on July 28 after a brief illness. Joe was born in the Bronx to Jennie and Stephen Decharo in 1929. He lived in the Bronx for 44 years and Yonkers for 42 before spending... View Obituary & Service Information

The family of Joseph “Joe” Decharo created this Life Tributes page to make it easy to share your memories.

Joseph “Joe” Decharo passed away peacefully at the age of 91...

Send flowers to the Decharo family.