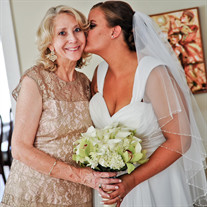 Laura Greaney Antonietti A life-long resident of New York’s Hudson Valley, Laura Greaney Antonietti was born on June 16, 1949, in Nyack Hospital. She died at the age of seventy in her bedroom overlooking the Hudson River in Irvington, New York on December 4, 2019. In her final days, Laura was comforted by her husband, family and friends. Laura was the second daughter of Joseph Greaney of Holyoke, Massachusetts and Louise Knotts of Evansville, Indiana. Laura’s oldest sister, Lisa Greaney, was two years older. Laura and Lisa’s parents married in Evansville after Joseph was discharged from the army following his service in the Army during WW II. Taking advantage of the GI Bill, the couple relocated to Camp Shanks in Rockland County, New York while Joe earned an M.A. at Columbia Teacher’s College. When Laura was less than two, her mother died of a hereditary type of cancer that is now known as Lynch Syndrome, and which would eventually claim the lives of both her daughters. In 1952, Joe met and married Veronica Farrell Clark of the Bronx, a war widow and the mother of Laura’s oldest brother, Bernard Clark. Together, Joe and Vera would have five children, starting with twins, Joseph and James, then Francis, Thomas, and Mary. Laura started young as a mother’s helper and remained very close to all of her siblings throughout her life. Later, as an aunt and great aunt, Laura was deeply interested in all of her many nieces and nephews, and did her best to maintain a relationship with each of them. Raised in Stony Point, Laura graduated from Immaculate Conception School and Haverstraw High School before attending Dominican College in Blauvelt. Laura majored in Education and was offered a teaching position after being a student teacher, but she decided not to follow the same career as her father. Laura met her husband, Louis Antonietti, while she was still attending Dominican, when both she and Louie were employed as childcare workers at St. Dominic’s Home for Children. Laura and Louie gradually became acquainted while caring for the children, or attending clinical supervision meetings. After dating for six months, they simultaneously asked each other to marry. Neither had planned to “marry young,” but they did the following year on April 22, 1972 in Immaculate Conception Church in Tompkins Cove. The couple moved to the North Riverdale section of the Bronx, where they would live for the next fourteen years. Next, they moved fourteen miles up the river to Irvington. While working as an ombudsman for the City of Yonkers, Laura studied to become a dental hygienist at Hostos Community College. She graduated second in her class and later taught at Hostos as an adjunct professor. Laura earned her next degree in public health administration at Hunter College; as a result, she secured a position as an administrator at Morrisania Health Clinic in the Bronx. The next step was seven years with Kaiser Permanente, primarily as a sales representative with a big red company car and an early version of a car phone. When Kaiser left the Northeast, some of the Kaiser doctors started the HMO that would become Westmed. From 1999 to 2013, Laura was part of the core team that built the organization. As Marketing Director, Laura was recognized at her retirement, “We honor your dedication, perseverance and creativity in shaping Westmed’s brand identity and entrepreneurial success. Your exceptional teambuilding, customer service and support of community health are the hallmarks of your legacy.” Laura’s commitment to her work, as well as her commitment to her family, was remarkable. Laura’s personal life was busy and interesting. She maintained many significant friendships, volunteered as an EMT in Irvington, and at Immaculate Conception Church, she taught religious education classes, joined the Altar Rosary Society, and served as a Eucharistic minister. Laura helped raise funds for cancer research, learned to paint with watercolors, and planted flowers on Main Street. Laura loved the arts and never stopped attending concerts and visiting museums. Swimming in a mountain lake was one of her greatest pleasures. She enjoyed a dynamic marriage based on love, romance, respect, and a shared dedication to her daughter and grandchildren. Years before her husband was ready, Laura knew that she wanted to adopt a child. She waited patiently until Louie felt as she did. Friends introduced them to the Catholic Home Bureau, and at age 35, they became the parents of a five-day-old infant. Julia Greaney Antonietti altered and enhanced her parents’ lives. Now Julia O’Brien, Julia and her husband Thomas are the parents of a toddler and an infant, Elizabeth Aurelia O’Brien and Hannah Jane O’Brien. Laura witnessed the birth of both her granddaughters. More than two years ago, when Laura was told that her condition was incurable, she decided, along with her husband, to cherish each day, and be together as much as possible. The couples’ final years of marriage included a number of trips to new and familiar places, alone, or with friends or relatives. But, by far, the greatest joy of Laura’s final years was taking on the responsibility, along with Louie, of caring for their grandchildren two or three days a week. Forever the mother’s helper, Laura was fulfilled and comforted by her contact with the two beautiful girls who responded to her love. Nothing thrilled her more than giving the kids a bath and a shampoo. A funeral mass will be Celebrated at Immaculate Conception Church in Irvington on Monday, December 9 at 10AM. Laura did not want a wake or any type of remembrance celebration. Laura also thought that a donation to your favorite charity would be far better than flowers.

The family of Laura Antonietti created this Life Tributes page to make it easy to share your memories.