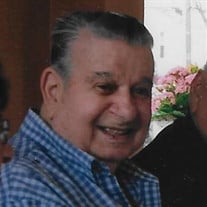 Lawrence Frank Becerra, 87, long-time resident of Dobbs Ferry, died at home on September 20, 2019 after a long illness, surrounded by his loving family. Lawrence was born on February 26, 1932 to Theodore Becerra and Angelina Tedesco Becerra. After graduation he enlisted in the United Stated Coast Guard and attended the United States Coast Guard Academy in New London, Connecticut. Lawrence served as Radio Man 2nd Class during his three years of service and received the Medal of Good Conduct. On April 25, 1954 he married the love of his life, Virginia Grandolfi, and raised three children in Dobbs Ferry. Lawrence was a skilled cabinet maker in the family business, Grandolfi Lumber Company. Larry loved nature, was a great fan of deer hunting, and would often visit Lake Placid with his brother Frank to fish for trout. Throughout his life he would travel to Spain and Italy and enjoyed many cruises with Virginia. Larry also spent many summers with his grandchildren at the shore in New Jersey. Lawrence was predeceased by his parents, his brothers Frank and Ned, sisters-in-law Rose Schultz and Elaine Grandolfi, brother-in-law Michael Grandolfi, and nephew Peter Becerra. He is survived by his wife of 65 years, his daughter Deborah, son Lawrence (wife Suzanne) and their children Nicholas and Mia, daughter Darlene Mee (husband Laurence) and their children Michael and Ryan, He was a favorite uncle to Kimberly and Nicholas Capuano, Mia Wall, and Gina Khaikhan. He also leaves sisters-in-law Isabel and Cecelia, as well as numerous nieces and nephews. In lieu of flowers, the family requests memorial contributions are made in Lawrence’s memory to the American Cancer Society Mass of the Resurrection Wednesday 10:00 AM Sacred Heart Church, Dobbs Ferry. Visiting Tuesday 4-8pm Edwards-Dowdle Funeral Home, 64 Ashford Ave, Dobbs Ferry.

The family of Lawrence Frank Becerra created this Life Tributes page to make it easy to share your memories.

Send flowers to the Becerra family.