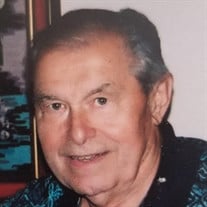 Livio Vincent Del Frari, a loving husband, father and grandfather and resident of Hastings-on Hudson, NY passed away on October 12, 2020 at the age of 93. Livio is survived by his wife Elida; his daughter Roberta Dell’aglio and her husband Corrado Dell’aglio; his grandchildren Mark and Justin Dell’aglio; and his sister Maria Martinuzzi. He is predeceased by his sister Giovanna Foscato. Livio was born in Sequals, a small comune in the Friuli-Venezia Giulia region of Italy, on September 1, 1927 to Giuseppe Del Frari and Antonia Cristofoli. Life there growing up was not easy. His father left for America to look for work before Livio was born and he was raised by his two sisters and mother. The onset of World War II caused more difficult changes to life and he looked for work as early as 12 years old, sometimes being turned down for being so young, in order to support the family. Following a chance of better opportunity, he emigrated to Bronx, NY in 1947 and met his father, who worked as a caretaker of the church. Soon after, Livio was drafted into the US Army in 1951 to serve in the Korean War. It was at basic training at Fort Devens, MA that he met Ferdinando Lucia (also Italian-speaking and from the Bronx) who would become his life-long friend and introduce Livio to his sister and future wife, Elida. Livio was discharged from the Army in 1953 and married Elida on May 1, 1955. They moved to Mickle Avenue in the Bronx and welcomed their daughter Roberta into the world in 1957. All the while Livio worked long and early days and holidays as a foreman for Zaro’s Bakery in the south Bronx, appropriately where he could satisfy his sweet tooth, and would wake at 2:30am to make cakes and other sweets that fed most of the city. At some point he even made cakes for the Giants and other sports teams. He did this for 45 years and officially retired in 1992 to be a full time grandfather, assistant soccer coach, gardener, “mosaicisto” (someone who makes pieces of art from mosaic), avid Serie A soccer fan, Famee-Furlan Italian Club member, bocce player, polenta connoisseur, and teacher of the Furlan culture among other things. He attributes his longevity to meaningful work, spending as much time with family as possible and having a daily shot of grappa in the morning. A wake service is scheduled from 3pm to 7pm on October 15th at Edwards-Dowdle Funeral Home; 64 Ashford Ave, Dobbs Ferry, NY 10522. A funeral service is scheduled for 10:00am on October 16th at St. Mathew Church; 616 Warburton Ave, Hastings-On-Hudson, NY 10706. His family is requesting that in lieu of flowers donations be made to St. Matthew's RC Church.

Livio Vincent Del Frari, a loving husband, father and grandfather and resident of Hastings-on Hudson, NY passed away on October 12, 2020 at the age of 93. Livio is survived by his wife Elida; his daughter Roberta Dell&#8217;aglio and her husband... View Obituary & Service Information

The family of Livio Del Frari created this Life Tributes page to make it easy to share your memories.