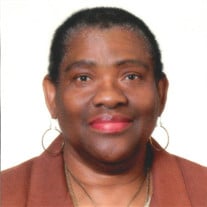 MAGDILINE LANGDON MAY 10, 1944 – MARCH 17, 2021 Magdiline Langdon, nee Ventour, was born in Febeau Village, Port-of-Spain, on the island of Trinidad and Tobago, West Indies on May 10, 1944 to Felicity Rose Prince and Jonathan Prince. At around age 6, she migrated to Grenada with her parents and siblings, where she spent her formative years, and re-visited Trinidad and Tobago at age 18 for several months to re-connect with family. Shortly thereafter, she returned to Grenada to assist her parents with farming and caring for her younger siblings, which were the customs at that time. Magdiline attended the Birch Grove Roman Catholic Schools and upon finishing school, she enrolled in and completed a trade course as a Seamstress in Grenville, St. Andrew’s, Grenada. At the age of 24, she married Emmanuel John Langdon and subsequently gave birth to three (3) children: Marva, Martin and Marlon. In 1968, when her husband immigrated to the US Virgin Islands and subsequently to the United States, Magdiline sought employment with the Grenada Banana Association to support her family until her subsequent migration to the United States in December 1973 to join her husband and brother, George. When Magdiline migrated to the US in 1973, she settled in Harlem, New York and quickly sought work as a Domestic with several families throughout New York and New Jersey. Magdiline always strived to do more and, as such, enrolled in a Nursing Assistant Program and eventually obtained certification as a Certified Nursing Assistant (CNA). In 1982, she joined the Nursing staff at Frances Schervier Nursing and Rehabilitation, Riverdale, New York until her retirement in 2007. Magdiline was fiercely independent and ambitious in that when her Harlem neighborhood became too dangerous, she “single-handedly” moved her family from Harlem to the Bronx in October 1989. Upon her retirement in 2007, she moved from the Bronx to Ardsley to reside with her daughter and family. During her retirement years, approximately 2007 to 2019, Magdiline had the opportunity to engage in her favorite activity, Travel. During the winter months, she travelled to the warmth and sunshine of the Spice Isle (Grenada) where her oldest brother, Lennie resided and would spend as much as six months on the Island. She enjoyed the opportunity to spend time in her own home, hosting family and friends, as well as spending quality time with her brother and visiting relatives and friends. Magdiline also enjoyed the social scenes in Grenada, especially the restaurants, beaches, shoppes, and Oh yes, Carnival! Magdiline thoroughly enjoyed meeting up with her good friends to make that special trip on a Friday, from St. George’s to Grenville, to eat at “Good Food”. Another memorable trip for Magdiline was a visit to England to meet several close relatives, friends and long-time classmates who resided there; in particular, her cousins Michael, Anthony and Redmond with whom she enjoyed good food, conversations and reminisced about passed relatives and friends. In 1994, Magdiline had an opportunity to enjoy a month-long vacation in her birthplace, Trinidad and Tobago. Once again, it was a chance to re-connect with numerous cousins, extended relatives and friends. Magdiline, affectionately known as “Mom”, “Momzie”, “Grandma”, “Big Sister”, “Brenda”, “Sister Brenda”, “Miss Brenda” or “Aunty Brenda” was well known amongst her family and friends for her cooking, baking and generosity. She will be remembered for her “Bully Bake”, “Fish Cake”, “Cod-fish Souse”, “Rice & Peas and Stew Chicken”, and those fun summer picnics in the Park. Magdiline was also known for her unwavering generosity, especially when someone was in dire need; her warmth and friendship; and, sympathetic ear. She was always available to listen and provide counsel, when necessary. Magdiline is survived by her children: Marva, Martin and Marlon; her husband, Emmanuel; her brothers, Lennie, George and Joseph; her sister, Miriam Iris (Lynette); her grandchildren: Marlon, Jr., Maya, Anna, Matthew, Marcel, Mason and Makayla; her son-in-law, Donald; her daughters-in-law, Esther, Tiffany, and Denita; her sisters-in-law, Joan, Sharon, Ralda, and Virginia (Ella); and, many cousins, nieces, nephews and friends in the US, UK, Canada, Grenada, and Trinidad and Tobago. To our Dearest Mom and Grandma………..WE LOVE YOU!! The Langdon/Ventour/Prince Family would like to extend our sincere thanks and gratitude to the following: The Alexander Family The Antoine Family The Bubb Family The DeGale Family The Edgar/Thomas Family The Eno Family The James Family The Mapson Family The Mondesire Family The Pierre Family The Prince Family The Taitt Family The Williams Family

MAGDILINE LANGDON MAY 10, 1944 &#8211; MARCH 17, 2021 Magdiline Langdon, nee Ventour, was born in Febeau Village, Port-of-Spain, on the island of Trinidad and Tobago, West Indies on May 10, 1944 to Felicity Rose Prince and Jonathan Prince.... View Obituary & Service Information

The family of Magdiline Langdon created this Life Tributes page to make it easy to share your memories.

Send flowers to the Langdon family.