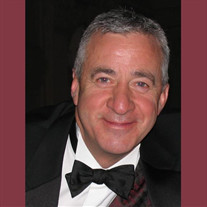 Malcolm William Beadling, 66, of Hastings-on-Hudson passed away on August 11, 2021. Born in Carlisle, Cumbria in the north of England, he was the son of the late William and Joan Beadling. From an early age he was an avid English football (soccer) fan, playing while growing up and achieving a relatively high level in amateur leagues and religiously following the Premiership matches in the UK. Malcolm worked in local government in London managing adult and community vocational training centers and before that he was the Chief Training Officer for Metal Box. Malcolm was an engineer by training and could fix just about anything or tackle any DIY project. Malcolm moved to New York City from London with his wife in 2002 and became a real estate agent and ultimately a broker. Working mainly for Sotheby’s, he sold and rented residential properties as well as managed a small portfolio of properties for investors. Malcolm had a passion for what he did and excelled at it. He came to know the whole of Manhattan, not just one area, like the back of his hand. In Malcolm’s later years, he once again took up motorcycling, something he had done in his youth, joined the NY Classic Riders with two Triumph motorbikes. He loved riding with the group on weekends around upstate New York, and even had a bike in his second home near San Diego, CA. He also golfed and attended some of the more significant tournaments. Malcolm and his wife MaryLee celebrated their 25th wedding anniversary at the Ryder Cup in Gleneagles, Scotland. He didn’t get much of a chance to do it, but Malcolm also enjoyed fishing and hunting geese and wild turkeys. He will be most remembered for his wicked sense of humor. Malcolm was quick-witted; he could always muster an immediate retort to just about anything, often delivered with sarcasm. Malcolm told many jokes, and it was always astounding that he created most of them, some of them were plain silly but others were ingenious. He also pulled funny faces, a lot. Malcolm was just funny, entertaining, and engaging, traits people LOVED about him! Malcolm is survived by his wife of nearly 32 years, MaryLee Sachs, brother, John Beadling, and his wife Katherine Beadling and by his nephews, Gary and Graeme Beadling and their respective families. Memorial service will be held on Friday, September 10th, 2021, at 12noon, at Edwards-Dowdle Funeral Home, 64 Ashford Ave, Dobbs Ferry. Some friends have been asking about wanting to donate to charity in Malcolm’s memory. If this is of interest and as Malcolm was a Brit with dual American citizenship, I’ve identified an appropriate charity on each side of the pond. Colorectal cancer is the 2nd leading cause of cancer death in men and women combined in the US, so It’s fitting that donations go to organizations specifically addressing that disease. In the US, it’s Fight Colorectal Cancer, and in the UK, Bowel Cancer UK

Malcolm William Beadling, 66, of Hastings-on-Hudson passed away on August 11, 2021. Born in Carlisle, Cumbria in the north of England, he was the son of the late William and Joan Beadling. From an early age he was an avid English football (soccer)... View Obituary & Service Information

The family of Malcolm William Beadling created this Life Tributes page to make it easy to share your memories.