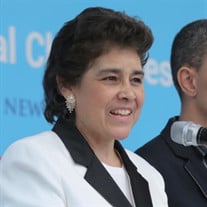 On May 19, 1955 Maria Louisa Vargas was born in Puerto Rico to Rosa and Raymond Vargas. She would be the second oldest of four children, and the only daughter. At the age of six, her family made the move to New York where they would be one of the only Hispanic Families in Black Harlem at the time. In this adversity, she learned to have a tough skin, and more so, deepened her resolve to stand up for those around her against those that would try to bully others. She may not have been the largest… but even as the daughter of the family she was often seen as the fiercest. Her family still loves sharing a laugh about how one of the childhood slogans from her brothers was "you’d better not mess with me or I'll get Maria on you!" Maria was raised in the Catholic Faith in a family that shared a deep reverence and love for God. She herself had a deep adoration for Christ even at a young age. She shared that while some of her friends would share that their role models were movie stars or athletes, her role model growing up was always Jesus. She would go on to complete her adolescent, high school, and college years in New York. In her early twenties, the holy spirit touched deeply her life through the Unification Movement. She found her calling to contribute to live a life inspired by Jesus, focused on creating a better world through the work on what we in the UC movement call the "front line" She married outside of the church to Peter Shau and had one child, Artie in 1983. While the marriage with Peter ended in the late eighties, she raised her son Artie in the unification faith, which continued to be a major force in their lives. She invested her heart and efforts into the ministries taking place the New York area, taking an active role in sharing God's love and truth. In her professional career, she worked as an executive assistant in the United Nations for over twenty-five years. She was grandmother to three boys; Logan (11) from her Son and his wife Estella, as well as two bonus grandsons that God added to the picture James (20) and Drake (17). Her contributions in the Unification Movement were broad and deep. She spent several years investing into the clergy of the united states and their congregations through her position in the American Clergy Leadership Conference She founded her own nonprofit - The Sun International Peace Foundation under which she developed programs which enlightened, educated, and uplifted others, especially our young people. She had a deep love for her extended family and spent a tremendous amount of effort investing into what we call "Tribal Messiahship" with extended family in Puerto Rico. She hosted several family reunions, prayer meetings, education, shared endless meals, connections, memories and laughs with family, stitching together and enriching branches of our family tree that would have never known each other without her. Her love for Puerto Rico was made even more evident when the hurricanes ravaged the island. She took it upon herself to create relief projects, building roofs for families that had them destroyed in the storm and installing solar generators so that communities would have both relief in the form of power, bringing light, communication, and refrigeration back to mountain communities, as well as enabling them to be resilient to these kinds of disasters in the future. Her most recent mission focus has been on the Universal Peace Federation or UPF. She served as Secretary General of Subregion 1… developing the hearts and leadership capabilities of a team of individuals each doing the work of love and unification in their given areas. She had a special passion for the Hispanic affairs of UPF, and she was instrumental in launching and facilitating the Peace Road 2020 and 2021 programs. What many of us are learning now is that she was battling through this life-threatening cancer while still investing whole heartedly into serving others in these Peace Road missions in her last years of life. In 2019, she was diagnosed with an aggressive uterine cancer. She focused on exploring all avenues of healing and pursued a mix of some western, eastern, and nontraditional remedies. In 2021, the cancer began to outpace the remedies that she was incorporating. After several procedures and chemotherapy, the cancer was impacting her vital organs and ultimately caused the end of her physical life. She passed peacefully overnight in Calvary Hospice Hospital in the Bronx, NY on October 7. Her loved ones were able to share their love and encourage her that it was ok for her to go, they were ready for her to move on now. She was in a deep sleep as she passed, with her Son Artie at her side in the hospital.

On May 19, 1955 Maria Louisa Vargas was born in Puerto Rico to Rosa and Raymond Vargas. She would be the second oldest of four children, and the only daughter. At the age of six, her family made the move to New York where they would be one... View Obituary & Service Information

The family of Maria Louisa Vargas created this Life Tributes page to make it easy to share your memories.

Send flowers to the Vargas family.