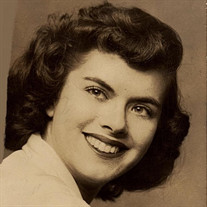 Marjorie Edelstein, age 91, passed away peacefully on Tuesday, December 29, 2020, having spent her last day in the company of her three children Audrey, Susan and Jeff. She was born in New York City on April 11, 1929 to Helen and Maurice Belgray. She was the older sister to her brother David, who passed away in 2018. Marjorie married Bernie Edelstein in 1954 and they enjoyed 56 years of a loving marriage. Their children, Audrey and Jeff were born while they lived at Sedgwick Avenue in the Bronx, and in 1962 they moved to Eastchester, twelve miles and a world away from the Bronx. Their daughter Susan was born three years later. Marge and Bernie instilled in their children the importance of family, education, and Jewish religious and cultural traditions. Their family was closely intertwined with the families of Marge’s brother David, his wife Alice and their children, and Bernie’s sister Ruth, her husband Howard and their children, celebrating holidays, weddings, and B’nei Mitzvot together, as well as many extended family social gatherings. Marjorie was an active member of Genesis Synagogue and Sinai Free Synagogue. Marge had a sweet gentle disposition, mixed with a touch of sass and a wry wit. Her eyes twinkled and her spirit shined throughout her life, touching all who came to know her. She was strongly independent and active in many community organizations. She graduated from City College of New York with Bachelors and Masters degrees, and taught high school math at Christopher Columbus High School in the Bronx. She was loved by her students, both because of her caring manner and because she pushed them to excel. Marge was a lifelong learner and supporter of the arts, taking classes well into her 80s. She loved nature and the outdoors, which was expressed through the gardens around her house and through volunteering at several local nature centers in lower Westchester. Marge was predeceased by her beloved Bernie in 2010. She is survived by her children: Audrey Knapp (Paul), Jeff Edelstein, and Susan Edelstein; her grandchildren: Kayla and Lucas Knapp; her brother David’s wife Alice Belgray; her husband’s sister and brother-in-law Ruth and Howard Eilenberg; and loving nieces and nephews. In lieu of flowers, contributions may be made to the Nature Conservancy, NARAL or Sinai Free Synagogue in Mt. Vernon, New York. Services are private.

Marjorie Edelstein, age 91, passed away peacefully on Tuesday, December 29, 2020, having spent her last day in the company of her three children Audrey, Susan and Jeff. She was born in New York City on April 11, 1929 to Helen and Maurice Belgray.... View Obituary & Service Information

The family of Marjorie Edelstein created this Life Tributes page to make it easy to share your memories.