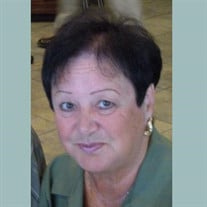 Mary Jane “MJ” Straub, 79, died peacefully on August 19, 2021 with her family by her side. A lifelong resident of Dobbs Ferry, Mary Jane was born in 1941 to Harry and Rose Liberato of Ogden Avenue. The 5th of 7 children born to the Italian immigrant and American orphan, the core values of hard work and love of family were adopted and embodied by Mary Jane throughout her life. Her early career in cosmetology, therefore, took a natural pivot toward care for friends and family. Friends and neighbors knew they could count on MJ for a quick-cut when in need and generations of first haircuts became a beloved tradition within her family. Mary Jane married her lifelong sweetheart, Alfred, in 1961 and later welcomed their three sons. A devoted wife and mother, Mary Jane took pride in creating a warm and loving homelife for her nuclear and extended family alike. A home cooked meal is recognized by all who knew her as MJ's signature love language. The couple was known for hosting open door gatherings in a modest sized space where Mary Jane demonstrated, with love, that “you don’t need a big kitchen to put on a big meal.” Mary Jane Straub is survived by her beloved husband of 60 years, Alfred, their three sons, Harry (Donna), Eddie (Susan) and Alan (Patti) as well as their 11 grandchildren: Tommy, Diona, Julie, Patrick, Samantha, Kevin, Steven, Jack, Kevin, Megan and Cara. She is also survived by her sisters, Frances and Elizabeth and many nieces and nephews. She is preceded in death by her sisters, Joanne and Virginia, and brothers Pasquale and Jimmy. Visitation services will be held at Edwards - Dowdle Funeral Home in Dobbs Ferry on Sunday, August 22nd from 4-9pm. Mass of the Resurrection will be at Sacred Heart Church in Dobbs Ferry on Monday, August 23rd at 10am. In lieu of flowers, the family asks for a donation to the Parkinson’s Foundation: https://www.parkinson.org

The family of Mary Jane Straub created this Life Tributes page to make it easy to share your memories.

Send flowers to the Straub family.