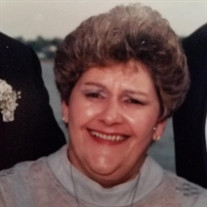 MaryAnn Wootten, age 82, passed away peacefully March 8, 2020. She was born June 20, 1937 in The Bronx, N.Y. to Peter and Theresa (Carucci) Russo. She married her longtime friend and love, Edward Wootten, November 16, 1958, who predeceased her in 2013. In her early years, MaryAnn pursued passions like ceramics and bowling. Nothing, however, felt as good to her as cooking for her family. For many years MaryAnn volunteered at her children’s religious education school, Sacred Heart Church in Hartsdale, N.Y. This activity suited her servant heart, it also allowed her to keep an eye on her raucous children. The quintessential Italian mom, MaryAnn fed people until they couldn’t move. Sunday mornings were filled with the smell of bacon and fried eggs, the aromas of sauce, meatballs, and sausage, braciola, pasta and chicken cutlets filled the afternoons. Her family, and anyone who entered the house for that matter, ate like kings and queens. The “action” drove MaryAnn. Scratch – Off Games and trips to Empire City Casino in Yonkers, N.Y. quenched her thirst. Nothing fulfilled this desire more than playing cards with the Cronin’s her longtime friends and neighbors. She is dancing in heaven with her sister Linda DeGasperis & Phillip Russo. MaryAnn had a vivacious personality and always made people around her laugh. She especially embraced the role of “Nana.” She made friends everywhere she went including the last stop on her journey, all the people at The Grove in Valhalla. MaryAnn is survived by two brothers-laws Goerge DeGasperis & William Wootten, her six children and their spouses – Theresa Turturro (Louis), Edward Wootten (Debbie), Linda Romano (Glenn), Robert Wootten (Dina), Joseph Wootten (Kara) and Michael Wootten (Jackie). Special recognition goes to her devoted daughter-in-law Dina Wootten. Dina was at MaryAnn’s beckoning call the last months, weeks and days of MaryAnn’s life. We are forever grateful. Nana is survived by fourteen grandchildren – Christopher, James, Angela, Troy, Jose, Justin, Patricia, Emily, Cassidy, Bobby, Haylee, Brandon, Vanessa and Michael. MaryAnn was fortunate to hold and care for one great-grandchild, Salvatore Turturro and many nieces and nephews.

The family of MaryAnn Wootten created this Life Tributes page to make it easy to share your memories.

Send flowers to the Wootten family.