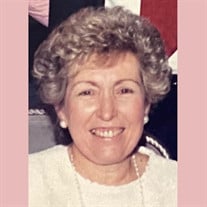 Maureen T. Potter, a long-time resident of Hastings-on–Hudson, New York, passed away peacefully on February 29, 2020 at the age of 88. She was born in the Bronx, New York to the late John and Mary Heneghan, immigrants from Castlebar, County Mayo, Ireland. Maureen was raised in Holy Cross parish in the Bronx. After her graduation from Cathedral High School in Manhattan and a brief career at the telephone company, Maureen met and married the love of her life, Richard “Dick” Potter. Together they raised six children, first in Holy Cross parish in the Bronx and later in St Matthew’s parish in Hastings-on-Hudson. Dick and Maureen were married for 52 years before Dick passed away in 2006. In addition to raising her children, Maureen was an active parishioner of Holy Cross and St. Matthew’s parishes. Later in life, Maureen re-entered the work force, first at EJ Korvette’s and then for more than 20 years at Mercy College, where she was awarded the Chair of the College upon her retirement in the early 2000s. Maureen was proud of her Irish Catholic heritage and her Bronx upbringing. She lived her faith through quiet and consistent acts of charity and kindness. She dearly loved and was proud of every single person in her immediate and extended family. Throughout her life she always had circles of devoted friends, some of whom kept in touch for more than 80 years. Maureen was the loving sister of the late John Heneghan (Catherine) and her surviving siblings Eileen (Frank) Jackson and Betty (John, deceased) Henry. She is survived by her loving children: Richard (Jeanne), John (Maureen), Christopher (Jackie), Mary Anne (Timothy, deceased) Gassert, Brian, and Brendan (Kim). She was the proud grandmother of her adoring grandchildren: Jaylin, Richie (deceased), Maureen (Patrick), Jimmy, Katie, Kensey, Sara (Spencer), Kayla (Matt), Jack, Sean, Lauren, Meaghan, Kevin, Maeve, Deirdre and Sean R.; and was the proud great-grandmother of her adoring great-grandchildren: Mary and Katy Lamb; Charlie and Annie Carson; and Charlotte Varga. In lieu of flowers, the family requests memorial contributions be made to Catholic Charities at www.catholiccharitiesusa.org Mass of the Resurrection 10:00AM Saturday Sacred Heart Church, Dobbs Ferry. Visiting 4-9pm Friday Edwards-Dowdle Funeral Home, 64 Ashford Ave, Dobbs Ferry.

Maureen T. Potter, a long-time resident of Hastings-on&#8211;Hudson, New York, passed away peacefully on February 29, 2020 at the age of 88. She was born in the Bronx, New York to the late John and Mary Heneghan, immigrants from Castlebar, County... View Obituary & Service Information

The family of Maureen T. Potter created this Life Tributes page to make it easy to share your memories.

Send flowers to the Potter family.