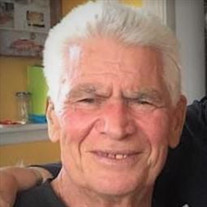 Michelangelo Giuliano of Dobbs Ferry, NY, passed away at St. John’s Riverside Hospital in Yonkers on Wednesday March 10, 2021. He was 85. He was born in the village of Camposano, within the City of Naples, Italy, on March 16, 1935. One of eight children, he was born to Antonio and Josephine (Crispi) Giuliano. He enlisted in the Italian Army at the age of 18 in 1953, before eventually being discharged in 1956. He married his future wife Francesca in Camposano on December 19, 1958. He emigrated to America in December 1958, originally settling in Astoria, Queens, before eventually moving to Dobbs Ferry in 1964. Michelangelo worked as a cement mason and foreman for the Century Maxim Construction company for over thirty years, from 1972 until 2003. After retiring, he liked to spend his free time with his grandchildren, tending to his extensive garden, bowling with his friends, and making homemade wine. He also liked to spend time helping at his son Joe’s pizzeria in Yorktown Heights, NY, where he became a staple of the local community. Michelangelo is survived by his devoted wife of 63 years Francesca, his son Anthony and his wife Maria of Ardsley, NY; his son Joseph and his wife Marina of Bethel, CT; and his four grandchildren: Michael, Marisa, Caroline, and Joseph Giuliano. He is also survived by his brother Michael of Warren, New Jersey, and his sisters Rose (Peluso) of Howard Beach, Queens, NY, and Antoinette of Camposano, Italy. He is predeceased by his parents, his brothers Salvatore, Carmine, and Joseph Giuliano, and his sister Maria Giuliano. Calling hours will be from 3:00pm until 8:00pm on Sunday March 14, 2021 at Edwards Dowdle Funeral Home, 64 Ashford Ave., Dobbs Ferry, NY. A funeral service will be held at Our Lady of Pompeii Church in Dobbs Ferry, NY at 10:00am on Monday March 15, 2021, followed by an entombment at Ferncliff Mausoleum in Hartsdale, NY. In Lieu of flowers the family is asking that donations be made to the Support Connection organization at www.supportconnection.org.

Michelangelo Giuliano of Dobbs Ferry, NY, passed away at St. John&#8217;s Riverside Hospital in Yonkers on Wednesday March 10, 2021. He was 85. He was born in the village of Camposano, within the City of Naples, Italy, on March 16, 1935. One... View Obituary & Service Information

The family of Michelangelo Giuliano created this Life Tributes page to make it easy to share your memories.

Michelangelo Giuliano of Dobbs Ferry, NY, passed away at St....

Send flowers to the Giuliano family.