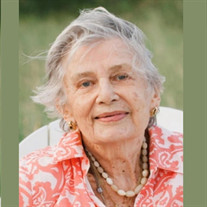 The Quintero family wishes to express its profound sorrow at the passing of Nadia S. Quintero, beloved wife, mother, and grandmother, aged 97, on December 13, 2021. Nadia was born Nadezhda Sergeyevna Kirsanova to a Russian family living in Cherkasy, Ukraine, then part of the Soviet Union. In her youth, she lived through some of the most tragic and tumultuous events of the 20th century, surviving the Great Famine (Kholodomor) of 1932-33, the Stalin-era Great Terror of 1936-38, and Nazi occupation during the Second World War. During the final year of WWII, she and her family became war refugees, ultimately finding shelter with U.S. forces. Fluent in Russian and German, Nadia taught herself English almost overnight, after winning a highly coveted job as a secretary inside the U.S. Military Government in Regensburg, Germany. She later immigrated to the U.S. and settled in New York City, where she supported her parents by designing textile patterns for the Lowenstein Company. In 1960 she married Alfredo Enrique Quintero of Maracaibo, Venezuela, who predeceased her in 2005. As a mother and homemaker, she took the greatest joy in raising her two sons, Alfredo and Andrew. A talented painter, pianist, and lifelong music lover, Nadia instilled the same passion for the arts in her children and grandchildren. She is survived by her son Alfredo and his partner Cynthia Hooper of New York, son Andrew and his wife Sheri Hellard of Los Angeles, granddaughters Anna, Elizabeth, and Natalie, and many friends, relatives, and loved ones. A funeral service will be held on Saturday, December 18 at 11AM in The Cathedral of Our Lady of the Sign, located at 75 East 93rd Street. Donations can be made in her name to the Russian American Children’s Foundation, where she volunteered as an interpreter for Russian families coming to the United States to receive lifesaving medical help (racfmiracles.org).

The Quintero family wishes to express its profound sorrow at the passing of Nadia S. Quintero, beloved wife, mother, and grandmother, aged 97, on December 13, 2021. Nadia was born Nadezhda Sergeyevna Kirsanova to a Russian family living in... View Obituary & Service Information

The family of Nadia Quintero created this Life Tributes page to make it easy to share your memories.

The Quintero family wishes to express its profound sorrow at...

Send flowers to the Quintero family.