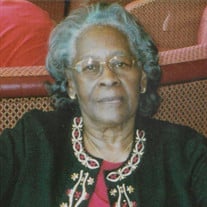 Ocie Striggles Birt-Mobley 1923 – 2020 Ocie Striggles Birt-Mobley was born December 3, 1923, in Savannah, Georgia. She entered into eternal rest, at age 96, on March 24, 2020, at New York Presbyterian Hospital. Ocie was the third of ten children parented by Watson and Allie Burke Striggles. She was named for her paternal grandmother, Ocie Cooper Striggles, and her maternal aunt, Ocie Burke Clark. Ocie believed in education and was a lifelong learner. An avid reader, she particularly enjoyed puzzle solving and word searches. Her early years as a student began at Burton Chapel, a school established and staffed by her great grandfather, the late Sam Striggles. Studious, inquisitive, and competitive, Ocie was an ideal student. After completing the curriculum in the Burke County School System, she lived with relatives in Waynesboro, Georgia, to continue school. She would later get accepted at Boggs Academy, a residential school that was owned and operated by the United Presbyterian Church (U.S.A.), where she excelled and graduated first in her class. Thereafter, throughout her working career, she would combine motherhood, work, and study. Having begun her career with the U.S. Mint in Philadelphia, Ocie married her high-school sweetheart and moved to Brooklyn, New York. To this union two children were born: Ronald Oscar Birt and Janis Odell Birt. She would later be gainfully and happily employed as a hospital dietitian and a social worker for many years. Following her first husband’s death and after her children had grown into adulthood, Ocie married Hubert Mobley, a childhood friend, of Detroit. Hubert, too, was widowed and was father of three adult children. He preceded Ocie in death. Ocie was a strong Believer and served faithfully in church affiliations in Burke County, Georgia; Philadelphia, Pennsylvania; Detroit, Michigan; and Brooklyn and the Bronx before relocating to Dobbs Ferry and becoming a member of South Church. She loved people and was an advocate for children. A perfect hostess, extraordinary cook, and engaging historian, everyone enjoyed visiting in her home and being recipients of her gracious hospitality. Ocie was predeceased by her parents; son Ronald; husbands James Birt and Hubert Mobley; and six siblings: Annie Ruth, Rosa, A.J., Watson Jr., Edward, and Sam. She is survived by her daughter Janis; three stepchildren: Lynn, Deborah, and Keith; three siblings: Virginia, Capus, and Sarah (Joseph); three sisters-in-law: Cynthia, Dorothy, and Mena; six grandchildren; many beloved nieces and nephews; and a host of caring relatives, friends, and neighbors.

The family of Ocie Birt-Mobley created this Life Tributes page to make it easy to share your memories.

Send flowers to the Birt-Mobley family.