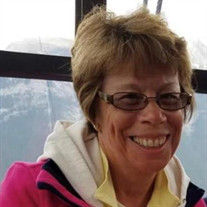 Patricia “Patty” Ann Breckels Altieri, 73, of Summerfield, Florida, bravely fought a years-long battle with cancer, until the Lord ceased her suffering and called her home to be with Him on Thursday, February 10, 2022. Patty was born in Dobbs Ferry, New York on October 6, 1948, to John E. Breckels, Sr. and Isabel (Miller) (Bachant) Breckels. Patty grew up in Dobbs Ferry and graduated from Dobbs Ferry High School in 1966. After graduation, she continued to live in Dobbs Ferry, where she worked for a short time at AT&T before beginning her career with MetLife. She then moved to Tarrytown, New York where she lived for many years and eventually would reconnect with Alan Altieri. On October 18, 1987, Patty married her beloved husband, Al. Patty worked the remainder of her career at MetLife, spanning over thirty years. She attended Marymount College later in life, where she graduated with honors, obtaining both her bachelor’s and master’s degrees. After retiring from MetLife, Patty worked for the Hackley School in Tarrytown before retiring full-time. It was then that she and Alan moved to The Hideout in the Poconos, Pennsylvania. For their next chapter, Patty and Alan moved to Del Webb Spruce Creek in Summerfield, Florida. Patty was a parishioner of St. Theresa’s Catholic Church in Belleview, Florida. In retirement, Patty enjoyed many activities. She was on a highly successful softball team and a part of two golf clubs. She and Alan loved to travel with friends, especially cruises, enjoying many special trips together. Her love of the Yankees was legendary. But, above all, she loved her family. Patty treasured her many friendships, some of which were lifelong. She was always energetic and lived life to the fullest. Patty will be remembered for her kindness, her positive attitude, and her fighting spirit. Her infectious laugh and beautiful smile will stay with us, always. Patty was one of a kind; she will be dearly missed by all who love her. Patty is survived by her daughter, Christine Altieri (Jeffrey) O'Sullivan of Grapevine, Texas; son, James T. (Nici) Altieri of Wylie, Texas; grandchildren Jaxson T. Altieri and Madison E. Altieri; sister Eleanor (Bachant) Anniccharico of Dobbs Ferry, New York; brother John E. (Louise) Breckels, Jr. of The Villages, Florida; brother in-law James (Joyce) Altieri of New York, New York; sister in-law Donna Altieri of Tarrytown, New York; niece Julianne (Paolo) Curiel of Washington D.C.; niece and goddaughter, Erica L. (Griffin) Breckels Post of Kingston, New York; nephews, Gary M. (Dawn) Annicchiarico of Dobbs Ferry, New York and John E. (Kortnie Emmons) Breckels III of Burnsville, North Carolina; great-niece, Angela M. Annicchiarico; great-nephews, Mark A. Annicchiarico, Matthew J. Annicchiarico, Nick R. Feiler, and Justin D. Annicchiarico; and great-grandnephew Andrew M. Annicchiarico. She is preceded in death by her husband Alan R. Altieri; sister, Isabel E. Bachant; brother James C. Bachant; brother in-law Anthony “Chippy” Anniccharico; and niece, Cheryl A. Anniccharico. A mass and service will be held at St. Theresa’s Catholic Church in Belleview, FL. A mass and service will later be held at Sacred Heart Catholic Church in Dobbs Ferry, NY and her final resting place will be Mount Calvary Cemetery in White Plains, NY. Details to follow, funeral will be late spring. In lieu of flowers, please consider making a donation to the The Brandley House: Hospice of Marion County, Brandley House 17395 SE 109th Terrace Rd. Summerfield, FL 34491 Or to St. Jude Children’s Research Hospital 501 St. Jude Place Memphis, TN 38105

Patricia &#8220;Patty&#8221; Ann Breckels Altieri, 73, of Summerfield, Florida, bravely fought a years-long battle with cancer, until the Lord ceased her suffering and called her home to be with Him on Thursday, February 10, 2022. Patty was... View Obituary & Service Information

The family of Patricia “Patty” Ann Breckels Altieri created this Life Tributes page to make it easy to share your memories.