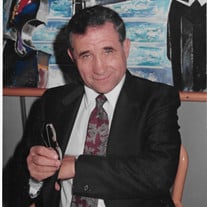 Patsy Cilurzo, a longtime resident of Ardsley passed away peacefully surrounded by his 3 loving daughters and devoted loving wife, on December 23, 2019 at the age of 88. He was born in the town of Torre di Ruggiero, Calabria, Italy, on July 10, 1931. He was the son of Nicola and Serafina (nee Gagliardi) Cilurzo. In the year of 1950, he arrived to America, on December 24th with the aid of his cousin, Nancy Trombacco, who sponsored him as well as invited him to live with her on Main Street in Dobbs Ferry. With the help of his cousins Nancy Lou Trombacca Macca, and Florence Trombacca Di’Caro he learned how to speak the English language by studying the dictionary. In 1956, he enlisted in The United States Marine Corps. He was proud to be a Marine as he would often say during his lifetime, “Once a Marine, always a Marine.” After, serving his time in the corps, he returned to Italy where he met Lina Barbieri, his wife to be. They married in January of 1961. They resided in Dobbs Ferry, NY. Soon enough, he bought a truck with a welding machine, and went around fixing & making railings for the houses in the local areas. He was referred by his customers to other people and his reputation was known to be a hard working man who could artistically design a railing, install it, and be guaranteed that it would never shake. Least to say, he was a perfectionist when it came to his work. He saved what he earned and started an iron works business, C&S Iron Works, which later became Patsy Iron Works, located in Elmsford, NY. He worked hard his whole life, and would often say, “ For every railing I make, I make for my family.” He is survived by his beloved wife, Lina Barbieri Cilurzo, his 3 daughters, Sarah Santoro, Agnes Malinari, and Mary Lou Cilurzo, He is also survived by his son-in-law, Paul Santoro, his grandchildren, Simone, Rachel, Emily, and Adam, five nieces, Sarah, Maria, Eleanor, Rita, and Maria Rita and nephews, Frank and Dominick. He is predeceased, by his daughter Rita, twin brother Dominick, brother Frank, and sisters Nicolina and Nancy and nephews Joe and Nicholas. His family and friends will miss his sense -of-humor and unconditional love. Memorial contributions may be made to Hospice and Palliative Care of Westchester or to St Jude Childrens Research Hospital Mass of the Resurrection 10AM Friday Our Lady of Perpetual Help Church, Ardsley. Visiting 2-4 and 7-9pm Thursday Edwards-Dowdle Funeral Home, 64 Ashford Ave, Dobbs Ferry.

Patsy Cilurzo, a longtime resident of Ardsley passed away peacefully surrounded by his 3 loving daughters and devoted loving wife, on December 23, 2019 at the age of 88. He was born in the town of Torre di Ruggiero, Calabria, Italy, on July... View Obituary & Service Information

The family of Patsy Cilurzo created this Life Tributes page to make it easy to share your memories.

Patsy Cilurzo, a longtime resident of Ardsley passed away peacefully...

Send flowers to the Cilurzo family.