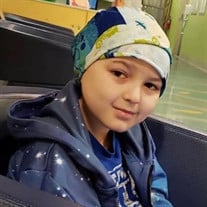 The courageous 10-year-old Raymond Joseph Sanchez, of Ardsley, NY, also known as Ray Ray went to be with the angels on September 1st, 2019 after a 16-month battle with brain cancer. Ray Ray fought vigorously; he truly was a fighter and warmed the hearts of many. He inspired members of his community, following and loved ones to never give up and to overcome hardship. Ray Ray was destined for greatness. Ray Ray loved his family deeply, and is survived by his parents Nicole and Raymond Sanchez; his twin brother Robert Sanchez; his Grandparents Robert & Rene Baulieu (also known as Poppy & Nanny) ; his Grandparents Yvonne (also known as momma) & Joseph Sanchez; his Aunts & Uncles Candace, Wally, Bobbi, Robert, Jonathan and Charlene; his cousins Deanna, Samantha, Robert (little Rob), Bellah and Mackynzi ; along with many other cousins and Great aunts and uncles. Ray Ray loved WWE, animals (specifically puppies), mine craft, the color blue, and accents. He loved accents and animals so much, that he mentioned on one of his school reports that he wanted to be an Australian veterinarian and marry a British woman. He also had aspirations to visit Africa and go on a safari. He attended Ardsley Middle School and built many friendships with the teachers and students there. His laugh, smile, upbeat personality, strength and charm will never be forgotten. Ray Ray was and continues to be a ray of sunshine. Relatives and friends are invited to commemorate Ray Ray’s life during the following dates and times: Wake: Edwards-Dowdle Funeral Home, 64 Ashford Ave Dobbs Ferry, NY 10522 Friday, September 6th, 2019 from 2pm - 4pm &. 7pm - 9pm Funeral Service: Immaculate Conception Church, 16 N Broadway, Irvington, NY 10533 Saturday, September 7th, 2019 at 10am Followed by the burial at Ferncliff Cemetery at 280-284 Secor Road, Hartsdale, NY 10530

The courageous 10-year-old Raymond Joseph Sanchez, of Ardsley, NY, also known as Ray Ray went to be with the angels on September 1st, 2019 after a 16-month battle with brain cancer. Ray Ray fought vigorously; he truly was a fighter and warmed... View Obituary & Service Information

The family of Raymond "Ray Ray" Sanchez created this Life Tributes page to make it easy to share your memories.

Send flowers to the Sanchez family.