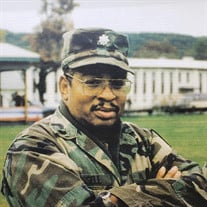 Richard Hassell Jr., affectionately known as "Junior," was born August 16, 1942 to the late Richard Hassell Sr. and Elizabeth Webster at Harlem Hospital in New York City. He departed this earthly life on April 14, 2020, in Yonkers, NY. As a child, Richard attended the public schools of New York City and grew up on Edgecombe Ave. in Harlem, New York. Anyone who knew Richard knew how proud and passionate he was about his country. It was no surprise when he joined the New York State Guard in 1959, and served for 30+ years. Early in his military career, he was recognized as a leader and quickly rose through the ranks to the position of Lieutenant Colonel. When the need for volunteers to assist during the events of 9/11 arose, he was there. His great pride, honor, and devotion to the military could always be seen through the excitement on his face as he shared his experiences. Richard was always known to express his everlasting love for his wife of 39 years, Mangaree AKA “Sugar , and five children. The pair wed on September 5, 1981, on the beautiful island of Trinidad. With generosity and love in their hearts, they welcomed 16 foster children into their home. He and Mangaree also hosted a number of family members from Trinidad who came to the USA seeking a better life. He considered many of his children’s friends as family, and treated them as his own. Richard was always willing to help others. He and his wife once housed an acquaintance she met on the bus. If someone didn't have food, he would say, “Sugar, cook some food so we can drop it off." Richard was a man of supreme generosity, kindness, and love. Richard's work history spanned a number of fields. He worked as an electrician, a truck driver, a cab driver, and even a D.J. in his spare time during his younger years. Thereafter, he served as a letter carrier with the US Post Office in New York City for 30 years. While working one his routes, Richard saved a life. Upon entering the building, he sensed unusual behavior, and after inquiry, learned one of the executives was found with no pulse. Well, that's all Richard needed to hear. He immediately rushed into the office and started performing CPR on the executive; shortly after, the man began to breathe again. Richard stayed with the man until EMS arrived. A humbled hero, he gathered his belongings and left to continue his route as normal. A few weeks later, he received a phone call from that very office, only to learn that the executive's life he saved owned Carnival Cruise Lines. As a thank you, the executive extended Richard and his wife an all-expense-paid, first class cruise around the Caribbean. Richard lived an extraordinary life; always ready to lend a helping hand when needed without question or hesitation. Richard was known for his willful energy and feisty, upbeat spirit. He loved to cut a rug and had a well-rounded musical palette. From Disco and Calypso, to R&B and Soul, Richard enjoyed it all. Even Salsa! He was also a lover of TV and film, and had a diverse taste in favorites including “The Cosby Show”, “Cheers”, “The Game (#TeamDerwin)”, “Star Wars”, and even Disney classics such as “The Lion King” and “Beauty and the Beast”. Richard’s zest for travel and adventure was infectious. Whether it was island hopping on a cruise or packing his family in a van and driving 16 hours to Orlando for a Disney experience, he just loved to travel. For their last crowning travel experience, Richard and Mangaree packed their bags and drove cross country on a month-long tour of the United States. Naturally, the trip afforded them many stories that Richard was eager to share with anyone who would listen. Additionally, he loved to document his travel experiences. Whether it was a beautiful landscape or a candid of his wife biting into a burger, Richard made sure to capture the moment. As an adoring father, Richard’s most cherished trips were when he would travel to see his beloved children. When asked, “Isn't it a long distance to drive?”, he would always reply, “I love seeing and spending time with all my kids; the distance does not matter to me." Richard was the eldest of five children. He is preceded in death by his younger son, Everette Hassell, his great-granddaughter, Shaniya Nevaeh Hill, his brother, Cedrick Hassell, and his sister, Janice Minney. Memories of Richard will always live in the hearts of his family. He is survived by his wife, Managree Hassell of Silver Spring, MD; his son, Richard Hassell III of San TanValley, AZ; daughters, Denise Hassell-Wrighton (James) of Edenton, NC, Elizabeth Hassell-Ringgold (Roderick) of Middletown, NY, Lucia L. Hassell of Silver Spring, MD; Grandchildren: Richard Hassell IV of Brooklyn, NY, Brandon Hassell of Bronx NY, Jessica D. Hassell of Baltimore, MD, Ashley C. Hassell of Mesa, AZ, Nya and Tamra Ames of Raleigh, NC, Re’gene Oates , Ne’gene Oates, and Kya Ringgold of Middletown, NY; Great Grandchildren: Kyrie Lewis and Lovonta Hill of Raleigh, NC; and his two brothers, Reginald Hassell of Queens, NY and Warren Hassell of Trenton, NJ. Acknowledgements On behalf of the Hassell family, we humbly thank you. Words cannot express the gratefulness we feel towards all of our family and friends who have lifted us with love and support during this time. Wishing health and safety to your families. Love, light, and unity will get us through these unprecedented times together. Please continue to keep us in your prayers. We would especially like to thank Pastor James Hassell and Avia Hicks-Chapman for all of their support with the service and otherwise.

Richard Hassell Jr., affectionately known as "Junior," was born August 16, 1942 to the late Richard Hassell Sr. and Elizabeth Webster at Harlem Hospital in New York City. He departed this earthly life on April 14, 2020, in Yonkers, NY. As a... View Obituary & Service Information

The family of Richard Hassell, Jr. created this Life Tributes page to make it easy to share your memories.