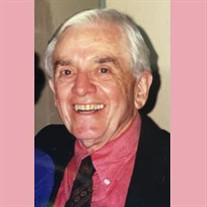 Robert Joseph “Pop” Connick Sr., age 95, of Irvington, N.Y. passed away Friday, March 11th, 2022. Robert is survived by Marion, his beloved wife of 68 years, three children, Robert Jr/Nancy, Laurie Schweigert and Beth Sohigian/Paul, as well as seven grandkids and one great-grandchild. He graduated from Irvington High School in 1944 and immediately entered the U.S. Navy, where he served in the Pacific. After the war, Bob attended New York University, graduating in 1950 with a degree in Marketing and Advertising. His first job was Sales Representative for Cleveland’s The Plain Dealer newspaper, selling advertising space. He remained for a year before beginning employment with the Wrenn Paper Company in Middleton, Ohio. which had an office in lower Manhattan, where once again, Bob was in charge of company sales. Because Bob’s position with Wrenn Paper Company involved travel, which was becoming more complicated with his additional responsibilities of fatherhood and homeownership, he decided to seek other employment. He accepted a position as Suburban Sales Representative at the New York Times, remaining there for 36 years! At age sixty-five, Bob retired and served on various Irvington committees and boards, including chairing the Irvington Recreation Commission in 1980, and co-founding FISH (Friends in Service Here), a program for senior citizens. He also taught CCD classes at Immaculate Conception Church. Bob’s dedication and service to the Village of Irvington and beyond have deservedly been recognized. Examples include Robert Connick Day, proclaimed December 3, 2006, by the Office of the Mayor of Irvington and a Hall of Fame Recipient Certificate of Appreciation from the Town of Greenburgh. At the May 28, 2013 program, Tomorrow’s Historians, Irvington High School Principal Scott Mosenthal, on behalf of the Irvington school district, presented Bob with a plaque honoring him as the village’s “Mr. History” in recognition of and gratitude for his remarkable passion and understanding of the history of Irvington and his willingness to share it with Irvington students–particularly at the Main Street School, where Bob regularly presented grade-level talks on immigration in Irvington as well as lessons on the historical development of the Irvington riverfront. Bob’s most ambitious project, The Birth and History of a Rivertown Village: Irvington-on-Hudson, New York: A Timeline of 400 years (1609-2009), is now a website and is available online at https://sites.google.com/view/irvington-on-hudson/home. Known as “Footprints and Fingerprints”, the website examines every aspect of Irvington, from the people, their houses, the jobs they held, and the various village institutions. It is an amazing, comprehensive, lasting gift and treasure he has bestowed on the town in which he lived and loved—a magnificent addition to its recorded history. Bob’s first book, An Historical Trip Through the Irvington Riverfront, has just been published. His second book, Fields of Dublin–which highlights the life and times of where he grew up in East Irvington–is in the process of being edited before it’s published later this spring. As a father, Bob was an amazing role model–a man of integrity with the highest moral standards. He was also one of the hardest working people we knew, who always wanted to provide the best for his family. Bob will be waked on Thursday, March 17th, at Edwards-Dowdle Funeral Home on 64 Ashford Avenue in Dobbs Ferry between 2-4 p.m. and 7-9 p.m. Funeral services will be held at Immaculate Conception Church in Irvington at 11 a.m. Friday, March 18. In lieu of flowers, donations can be made to the Wounded Warrior Project and/or the American Cancer Society

The family of Robert J. Connick, Sr created this Life Tributes page to make it easy to share your memories.

Send flowers to the Connick, family.